Day two began in San Marcos under clear skies and cool temperatures as we left for the 75-mile ride to Georgetown. The tailwind we had yesterday was nice enough to stay with us for at least another day.

One of the main stops of the day was a visit to the VA Clinic in Austin, where we were cheered as we entered the parking lot by VA employees from the clinic and the  Financial Services Center, who had placed dozens of American flags along the street leading into the facility.  We were welcomed by Sharon Wills, the Team Lead of the Austin Post traumatic Stress Clinical Team and presented a signed jersey to Terry Riffel, Director of the Financial Services Center.

After leaving the VA, we rode to Wayne Fueling Systems, a division of Dover, where the USO teamed up with the great folks at Wayne to serve our riders one of the best lunches we have enjoyed during a Challenge ride highlighted by snow cones, quite a relief with temps in the low 90’s.

The highlight each year in Georgetown is a movie night hosted by City Lights Theater.  The front of the theater was beautifully decorated with welcome signs, custom Corvettes and Camaros with patriotic-themed paint jobs, and a reception as we entered the theater by a crowd of supporters from the community, the Navy ROTC and cheerleaders from Georgetown High School.

On the ride is a truly inspiring rider, Michael Hicks. Michael’s first Challenge ride was the 2010 California Challenge and he has ridden in four others but before today had not ridden his bike regularly or for distance for quite some time.  A lifelong bike rider, Michael served in the Army for 28 years and was deployed in Desert Storm, OIF and OEF before being medically retired following several IED blast episodes.  His cycling achievements include riding across the entire state of Montana in 1982.

For Michael, who hopes to ride in the Great Lakes Challenge later this year, the peer-to-peer support he enjoys is a huge factor in his support for Project Hero.  “I feel comfortable talking to soldiers, Marines and other members of the service because we understand each other,” he said. 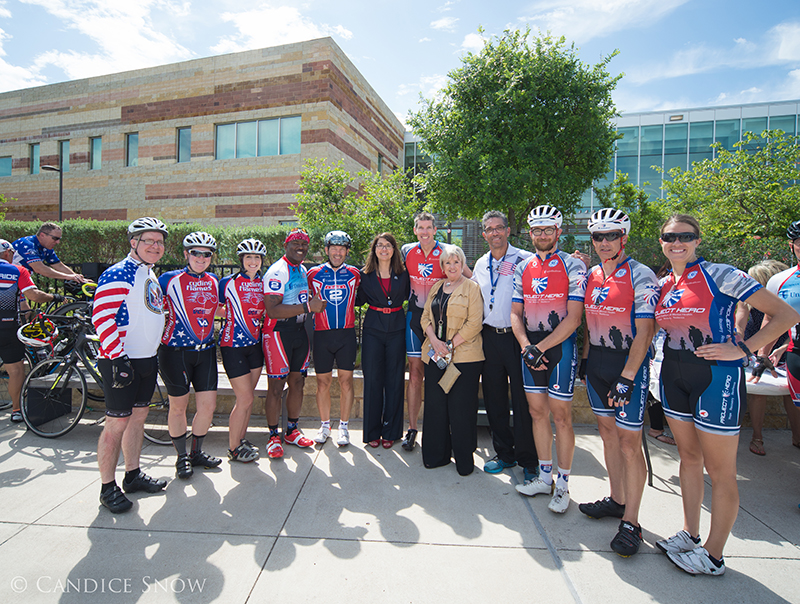 “Bike riding gets me out of the house – I love being on a bike,” he said during the lunch stop at Wayne Fueling Systems.  “I wouldn’t have even left the hotel today without help -The staff helped me out of the hotel and stayed with me into Buda.

His advice to those who don’t know about Project Hero is to first do an Honor Ride and “get with the soldiers,” he said. “You don’t even need to own a bike because Project Hero can supply one.  Just get out of the house and don’t be afraid – get off the couch and you’ll see why riding with this group is so great.”

Strikeout PTSD
Today also marked the launch of our fundraising program with star Major League Baseball pitcher Matt Moore of the San Francisco Giants.  Matt has ridden with us and is a longtime supporter of Ride 2 Recovery. Building on his successful December fundraising campaign for Project Hero, Matt will donate $50 for each strikeout he records throughout the season and will match donations to the campaign, which can be made by texting HERO to 41444, up to $10,000.  We thank Matt for his support and encourage everyone in Project Hero to promote and participate in the campaign.