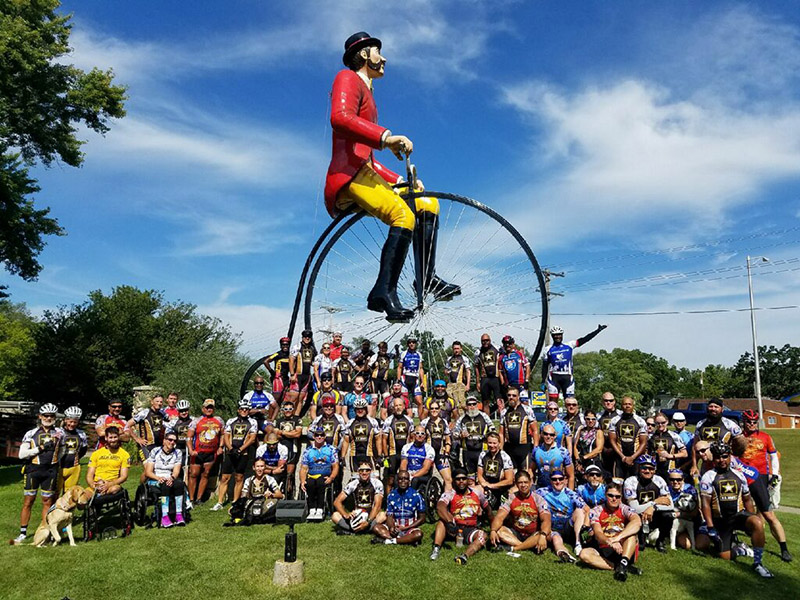 From the warmth of an elegantly decorated barn to the dizzying heights of the 80th floor of the Aon building in downtown Chicago, the 2017 UnitedHealthcare Great Lakes Challenge literally took Project Hero to new heights. This year’s Great Lakes Challenge was a showcase of three of our nation’s most beautiful states and the unique Project Hero experience and community. Each day of the Challenge featured something special, and it easily ranks as one of our most enjoyable and successful Challenges.

“I was just keeping it all inside,” Alberto said, “and taking meds and shutting out everything and then James helped bring me back from a breaking point. I didn’t know if I could do [the ride], but James said ‘you can do it!’ and here I am!”

James agrees. “With Project Hero, there’s helping hands everywhere out there, you just have to reach out to them.”
Our journey began on August 6 at UnitedHealthcare headquarters in Minnetonka under blue skies that matched the blue shirts worn by many of the UnitedHealthcare employees who came out to cheer us.  The kickoff was held in front of UnitedHealthcare headquarters on a stage trimmed with American flags, and we were honored by remarks from US Representative Tim Walz, one of the most ardent advocates for Veterans in Congress, and Steve Nelson, CEO of UnitedHealthcare. Steve and members of his family rode with us. and we were joined on the ride by a group of enthusiastic UnitedHealthcare employees. Following the 58-mile ride to lunch, some of our riders boarded buses for the ride to the hotel while a group of more than 30 continued on a 109-mile route to Rochester to achieve their Century goal for this Challenge.

Our second-day ride of 72 miles kicked off at the Peace Plaza at the Mayo Clinic in Rochester, where Mayor Ardell Brede accepted both a signed jersey and our challenge to open a HUB program in his great city.  At our arrival on Tuesday afternoon in La Crosse, Wisconsin, we were greeted by dozens of local supporters waving flags and holding up signs and enjoyed a tasty dinner at the Waterfront Restaurant.

After wonderful La Crosse,  the 82-mile ride to Reedsburg took us through green hills and farmland filled with seemingly endless fields of corn.  Our route took us into Sparta, one of America’s most cycling-loving towns and home to the famous Ben Bikin’ statue.  The ride included several hills that challenged, then rewarded with superb views of the Wisconsin countryside from the summits and was highlighted by a surprise flyover by a Blackhawk helicopter arranged by Chad Bromwell, one of our riders from Madison.  What an amazing sight that was!

Our 54-mile ride to Madison from Reedsburg included a rest stop at Devil’s Lake and Devil’s Lake State Park. We reached the park after riding the idyllic pretty winding forest road that emerges at the lakefront where vacationers swim, row canoes and enjoy a sandy beach.  We delighted in the scene and it was one of the nicest rest stops of the Challenge. More local hospitality waited for us at Springfield Corners, where families cheered us and served a lunch of tasty homemade baked goods, salads and sandwiches.

Our dinner in the Badger State capital was hosted by our good friends at Saris Cycling.  They took us on fascinating tours of their impressive facility and in addition to great beers and brats, they had a s’mores bar!  Saris’s hospitality showed why they are a leader in the cycling industry and such great friends of Project Hero. Although our fifth day on the road marked the first time in all of this year’s Challenges we experienced rain, riding past fields of colorful wildflowers and green farmland in beautiful Wisconsin made a few brief rainfalls easy to bear. As we started our day, we were joined by John Rohrer, Director of the William S. Middleton Memorial Veterans Hospital in Madison, and Rob Paddor, whose unquenchable positive energy sent the group off with a smile.

We rode to beautiful Lake Geneva and the Grand Geneva Resort, where our female riders and staff enjoyed a Women’s Social and dinner sponsored by Rob and Evanston Subaru.  We were joined at dinner by our new Board member Tom Abraham, whose generosity is helping us open our new HUB in Miami.  To finish off an excellent day, Rob arranged for buses to take our group into Lake Geneva to enjoy a night on the town.

Our 50-mile ride on Thursday to Palatine, Illinois, was Women’s Day so it was appropriate that Valette Britt spoke with us before the ride.  It was the two-year anniversary of her accident during the Leadville 100 mountain bike ride, and her remarks and courage were deeply inspirational.
Al Kupsik, the Mayor of Lake Geneva, also spoke to us before our departure, and at lunch we honored our 2017 Most Inspirational Riders, Marahani Joseph, Pat Ryan, James Tabares, John Ayo and Megan Hewitt, who were presented with FitBit watches donated by the USO, for their superb performances in the 2017 Great Lakes Challenge.

The day concluded with a memorable dinner at Rolling Oaks Farm hosted by Dick and Judy Duchossois, Mary Galvin, Marimarie and Frank Konicek, Charley and Sandy Denny, Colleen Konicek and Dede Wamberg, the organizers of the Project Hero Barrington Honor Ride.  It was one of the most beautiful locations any Challenge has visited.

Our ride the next day was a unique experience for many Challenge participants as we took part in the Project Hero Barrington Honor Ride, where we were among more than 300 riders who raised money for Project Hero starting at a gorgeous horse paddock and riding on the beautiful roads of Barrington Hills.  We enjoyed the Honor Ride and the 34-mile ride into Chicago that followed, and led by our courageous American Legion riders, we rode through crowded streets and neighborhoods of the Windy City ending the day under brilliant blue skies near Lake Shore Drive at the waterfront.
Dinner that evening was unforgettable and surpassed even the gracious warmth and generous hospitality of the previous night in Barrington Hills.  We were cordially hosted by Dover Corp. and Bill and Diane Spurgeon at the Mid-America Club, one of Chicago’s most exclusive venues overlooking the city with spectacular views from the 80th floor of the Aon Building.  It was an ideal finish to a superb Challenge, especially since we were joined by Project Hero Board of Director members Rob Paddor, Rear Adm. Mike Stocks (Ret.), Bill Spurgeon and Tom Abraham.
As is our tradition, we honored riders for their inspirational contributions to the Challenge.

As a symbol of our esteem, respect and affection, and to keep them riding towards hope, recovery and resilience, we presented Candice Morgan, Alberto Pedroza, Brian Scott, Matthew Schroeder and Jonathan Dade with the bikes they rode during the Challenge.

The next morning, we were sent off from the hotel by local UnitedHealthcare volunteers, bookending the enthusiastic send-off we received in Minnetonka.
We left downtown Chicago and toured the waterfront and famous Lake Shore Drive before heading into Skokie to Rob Paddor’s Evanston Subaru. There Rob, Niles Township Trustee Mark Collins, UnitedHealthcare’s Tony Marusic and a great group of enthusiastic Subaru employees lining the street and waving flags cheered and celebrated our arrival. From the massive American flag raised by members of the Skokie Fire Department to a great lunch, it was a wonderful way to end our journey.
“This is a great group and I feel so much comraderie here,” Candise Morgan said at the end of the 450+ mile adventure.  “Everybody understands each other.  I see other riders more challenged than I am and that motivates me. If they can do it, I know I can. Other organizations ask you ‘what’s wrong’ first, but that’s not how Project Hero approaches it.  It’s rejuvenating and I’ll be sad next week because I’ll miss all this.”
“It’s extraordinary how everyone is so encouraging, so transparent about themselves, and so accepting — it’s like a big family,” said James.
Project Hero could not have enjoyed such a successful Challenge without the unwavering support of the American Legion riders, volunteers, USO, local law enforcement agencies and members of the UnitedHealthcare family who came out to support us and celebrate our riders.  Project Hero also thanks the riders who participated in our third HEROTrak study.  Dr. Farzan Sasangohar and his team are downloading the data collected during the challenge and will use that analysis and the many comments by our riders to improve the HEROTrak PTSD monitor and help our Healing Heroes continue to achieve hope, recovery and resilience.