Project Hero Pinellas to the Rescue! 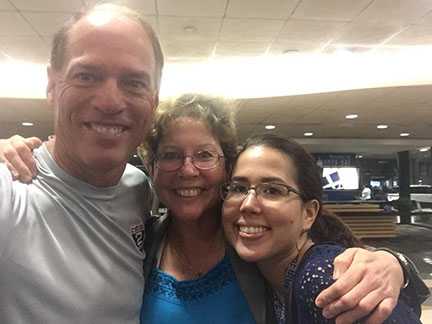 Thanks to the diligence, dedication and resourcefulness of Project Hero’s Mitch Lee and Kelly McDonald, Jazmin Coll-Seranno, a Project Hero HUB Pinellas rider, was recently reunited with her daughter Yazmari following a narrow escape from the devastating Hurricane Maria in Puerto Rico. Jazmin, is an Air Force Veteran who lost her eyesight due to a degenerative eye disease, completed the Texas Challenge two years ago and rides on a tandem. Her daughter is also a Project Hero rider. More than six months ago, Jazmin left the mainland to be with her father in Puerto Rico. And like so many on the island, after the hurricane she was faced with a challenge of survival. Forced to collect rainwater for drinking and washing and stand in long lines for food, she dealt daily with the spread of diseases and the mounting death toll. With no power, no air conditioning, increasing threats to her health and incredibly difficult living conditions, she sent word that she needed to evacuate. But there was one major problem: she had no way to get out. In desperation, her daughter contacted Kelly and Mitch for help and they quickly went into action. They set up a pre-plan for phone calls to relay word to Jazmin that Project Hero was working on a solution and then arranged and financed air transportation for Jazmin and her service dog, Lucky, to Tampa, where Yazmari daughter lives. Then they had to ensure that Jazmin could reach the airport. Once they confirmed she could get there, they gave the green light to “Project Rescue Jazmin and Lucky.” Jazmin finally arrived late in the evening on October 12 at Tampa Airport, where she was met by her daughter for a truly inspiring and tearful reunion. “It was truly a joy to be present to witness her return and the heartwarming welcome by her daughter,” Mitch said. “If she had not been part of Project Hero, she would likely still be suffering in Puerto Rico.”