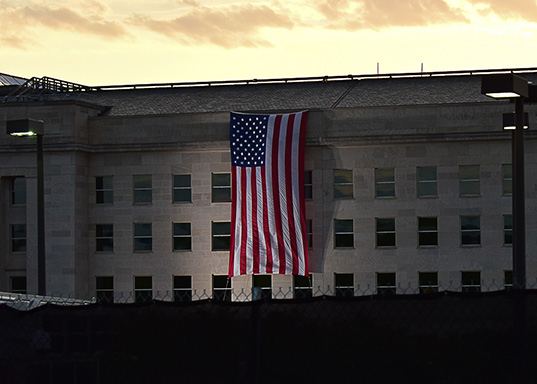 Retired Robert Gray, Battalion Chief of the Arlington County Fire Department, Virginia, Robert Gray, is a hero to everyone involved with Project Hero. Greatly respected for his service to his community and our nation after 9/11 by our riders, staff and supporters, he epitomizes the hope, recovery and resilience that is at the heart of the Project Hero mission.
Project Hero was honored by Bob’s powerfully moving presentation during the 2017 UnitedHealthcare Memorial Challenge presented by Boeing, here is what he had to say…

“I am so happy to be riding with all of you on this Project Hero Memorial Challenge. This organization is one of the primary reasons I am here with you today because this has played a significant role during my post-injury recovery...
In the picture on this page [A], you see several officers I worked with in Arlington County, Virginia – home of the Pentagon. In 2001, I was working at the Arlington County Fire Department (ACFD).  After 9/11 happened, I was a part of the collapse work team at the Pentagon, which included the body location and removal of passengers from Flight 77.
Extinguishing the Pentagon fire took nearly two days. Once we completed this, as a Technical Rescue/Collapse captain, myself and another ACFD captain were selected to lead the collapse work needed to prevent secondary collapses and manage the search for survivors and those who did not survive. We worked with Alexandria Fire, FEMA teams and Old Guard soldiers to get this done. Over the following two weeks, the collapse work focused on structural shoring to fight potential structural failure. It was extremely hazardous work due to the heavy pieces of limestone that were loosened from the aircraft impact. Known as “widow makers,” these 25- to 100-pound pieces of structure were extremely dangerous because if they fell, the sheer weight of the debris could take a life, even if wearing helmets.
The memorial [photo B] meant a lot to all of us but as we started moving through the area with the benches we realized that most of the victim’s families were spending time at the bench of a lost family member. Although there were four American Airlines planes that went down on that day, including Flight 11 (North Tower), Flight 175 (South Tower), and Flight 93 (Shanksville, PA), I consider Flight 77 (Pentagon) a singular event.
My bet with each of you in this room is that you all remember exactly where you were on September 11, 2001. I have yet to ask this question to a group to get a ‘no’ answer, because on that day one of the most significant attacks on the United States occurred on our soil. This event changed most of our lives in many ways.
Also on this page is a picture [C] of my Collapse Team standing in front of where Flight 77 impacted the building after our closing ceremony on the day we handed the Pentagon over to the FBI to continue evidence collection. The wood stack just to the right of the American flag in this picture is a good example of what we built to support the damaged areas of the building, which involved over 15 miles of 6x6 lumber on all four floors in that area of the Pentagon.
Another picture [F] is of me standing with John Wordin, founder of Ride 2 Recovery/Project Hero. This photo was taken at the National September 11 Memorial & Museum during 2014 when it was opened to the public. This picture is of John and I standing in front of the Pentagon display area. Before riding with Project Hero I couldn’t even imagine that I would be able to ride my bike again.
On this page is a picture [E] of the collapse gear I used at the Pentagon once we extinguished the fire. I donated this gear to the 9/11 Memorial & Museum during my TBI recovery in 2011 and this picture was taken during my first visit in 2014 during the Minuteman Challenge. After about thirty of our riders reached this secured area in Spandex, I was taken over to see the exhibit with my gear.
At this point, cell phones started to come out and the museum security team firmly stated, “Please put all phones and cameras away – no pictures can be taken in this area.” One of the riders then spoke up firmly saying, “This gear is Bob Gray’s and he is with us!” while pointing at me. Once the security guards confirmed this, they turned away and gave our group quiet permission to take pictures. Take a moment and imagine this situation with 30 or more cyclists wearing Spandex gear along with security guards in full uniform – it was almost comedic!
Ride 2 Recovery/Project Hero is playing a significant role during my Traumatic Brain Injury (TBI) recovery. I’ll tell you more about my injury after we discuss my recovery. The first Project Hero ride I participated in was the Texas Challenge in 2012 [G]. I had the opportunity to speak to the group before the challenge but I was struggling with speaking and walking. After speaking, John Wordin challenged me to ride next year. I do like a challenge – so I rode one day of the Texas Challenge in 2013. These personal challenges continued and this is my 12th Project Hero Challenge since my injury –  this means so much to me that cannot be put it into words.
These pictures [D, H-K, N] highlight a few of cherished memories from these Challenges: 2014 Minuteman Challenge, 2015 Memorial Challenge where my son, myself and Vice President Biden stood together on day one, 2016 Memorial Challenge, and a picture from the 9/11 Challenge last year, which is so far is my favorite Challenge yet.

My Accident
My accident occurred when I was cleaning dust from an elevated area in our foyer when my wife was out of town. I fell from a 16-foot ladder and went unconscious immediately. My 16-year-old daughter (my Hero!) made it home first, found me and called 911 for help.
When the medic unit arrived, they found me in respiratory arrest, started working on me and called for a medi-vac. After being flown to Parkland Hospital in Dallas, the neuro-surgery team removed a large portion of my skull to relieve the pressure caused by two arterial bleeds inside my skull.
Once the surgery was completed, my wife was told that they were unsure if the injury could be survived, and if I did I would most likely spend the rest of my life in a nursing home. I did survive and after a three-week coma, I didn’t remember anything until about two months later. After that, I fought very hard to learn how to speak, drink, and everything else nature requires. After the first six months of rehabilitation, I started to regain the use of the right side of my body and relearn how to speak. My second six months of rehab targeted PTSD because before waking up I started every morning after walking out of the Pentagon where Flight 77 entered.
Included is a picture [L] of me after my third brain surgery to, once again, remove my natural skull piece that started to cause repetitive Methicillin-resistant Staphylococcus Aureus (MRSA) infections, followed by a picture [M] of my 3D printed skull, which enabled the same printing technique to build a prosthesis to replace my natural bone.
Once this was installed by the neurosurgeon, he visited us in the recovery area and said that the prosthesis fit very well and it could take a direct hit from a framing hammer. Three months after having this prosthesis installed, I did the Minuteman Challenge and I have not had a skull infection since. Please remember that you are not alone and the Project Hero rides provide you with an amazing support group – one that lasts beyond the actual ride. When I say “don’t hesitate to ask for help” I say this with personal experience. It took me 36 years to do it myself and because of this I started counseling about 6 months ago and doing so started pulling me out of the pit. One of the most important things to remember is that sharing your story is important and helpful, but asking for help is by far the most vital part of this.

Words of wisdom from Chief Gray
All of you have been through significant challenges. Project Hero rides provide a unique opportunity to share your experiences with others who are dealing with similar challenges and I strongly believe that one of the most important things you can do is to share your story with others.
When I say “don’t hesitate to ask for help,” I say this with personal experience. It took me 36 years to do it myself and because of this I started counseling about 6 months ago and doing so started pulling me out of the pit. One of the most important things to remember is that sharing your story is important and helpful, but asking for help is by far the most vital part of this.
Asking for help is true bravery and it will provide the support needed to your life at work and at home with your family.
Thanks to the support of my wonderful family, my friends and co-workers and my Project Hero family, I now understand what that means.
All public service organizations are working on understanding the value of building resilience and enhancing behavioral health. The military, thanks to George Casey, is making progress with this. Fire, EMS and PD have a long way to go to ensure a true understanding of this.
While it can be painful to talk about your experiences, but within one day or so the pain will stop and you will be dealing with one
less “monkey on your back.”
Please remember that you are not alone and the Project Hero rides provide you with an amazing support group – one that lasts beyond the actual ride.
My wake-up call about this happened on an airplane when the flight attendant gave instructions on using the oxygen mask in case of emergency. She said, “If you have children or other people around you that need assistance, always put your mask on first and then assist the others.”
I am the epitome of what I define as “Facade.” Most of us in this room have lost friends to suicide. Two of my friends who took their lives were facades. After very stressful and difficult calls, they always stepped in to take care of everyone else – but not themselves.