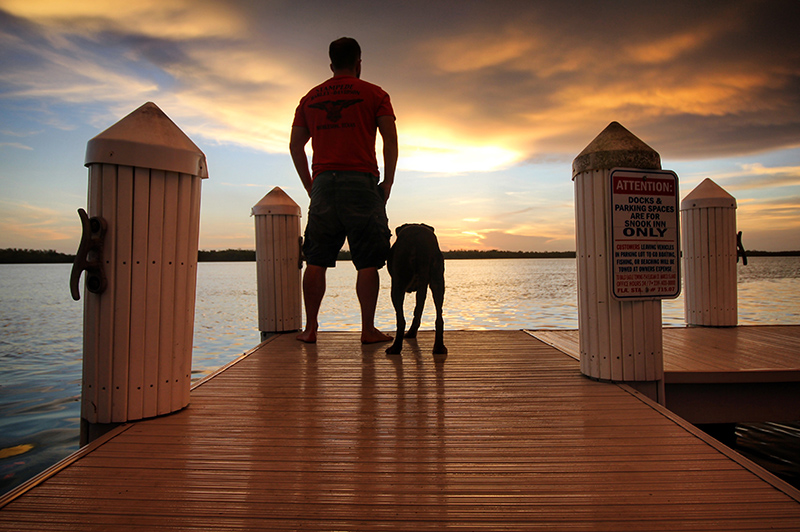 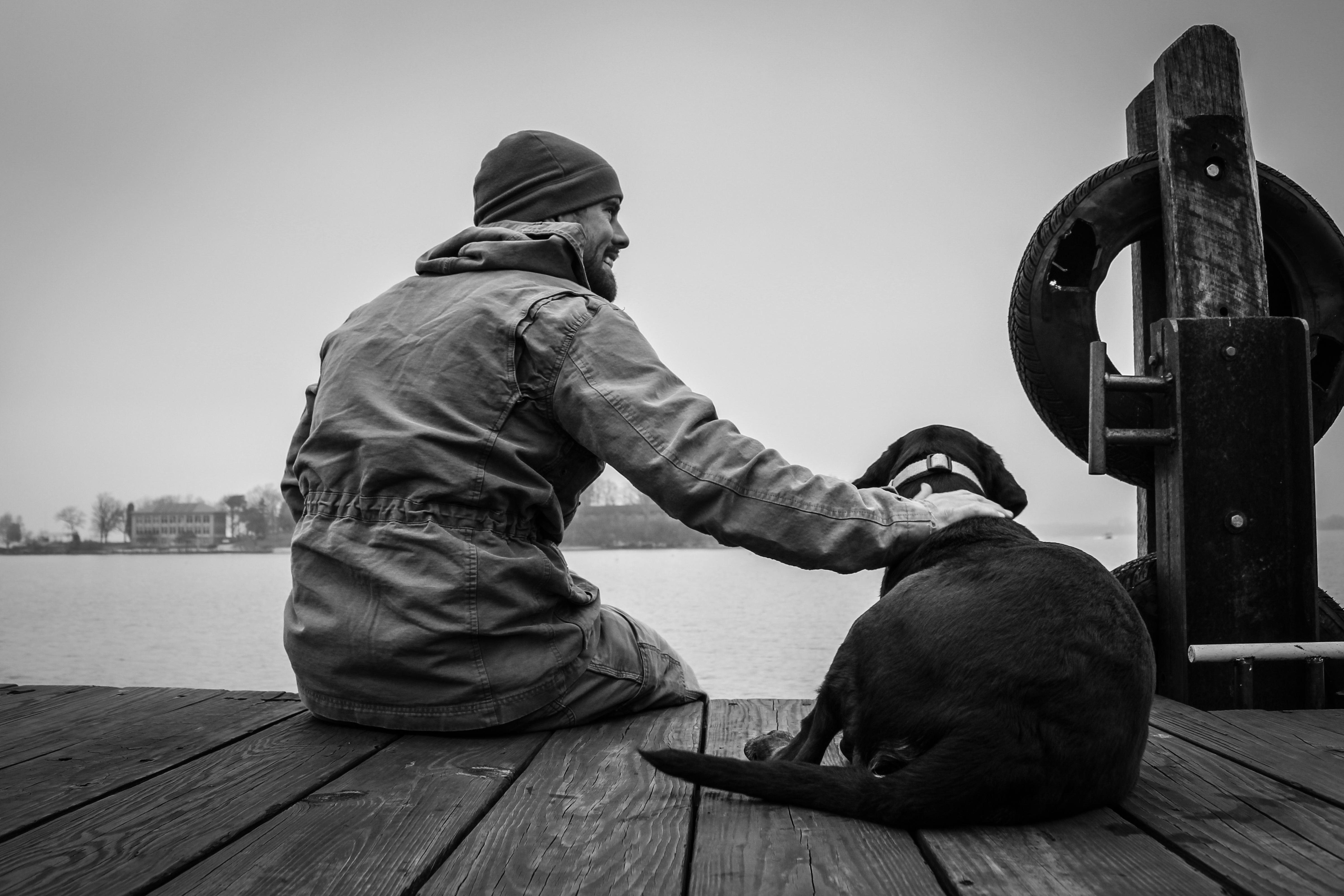 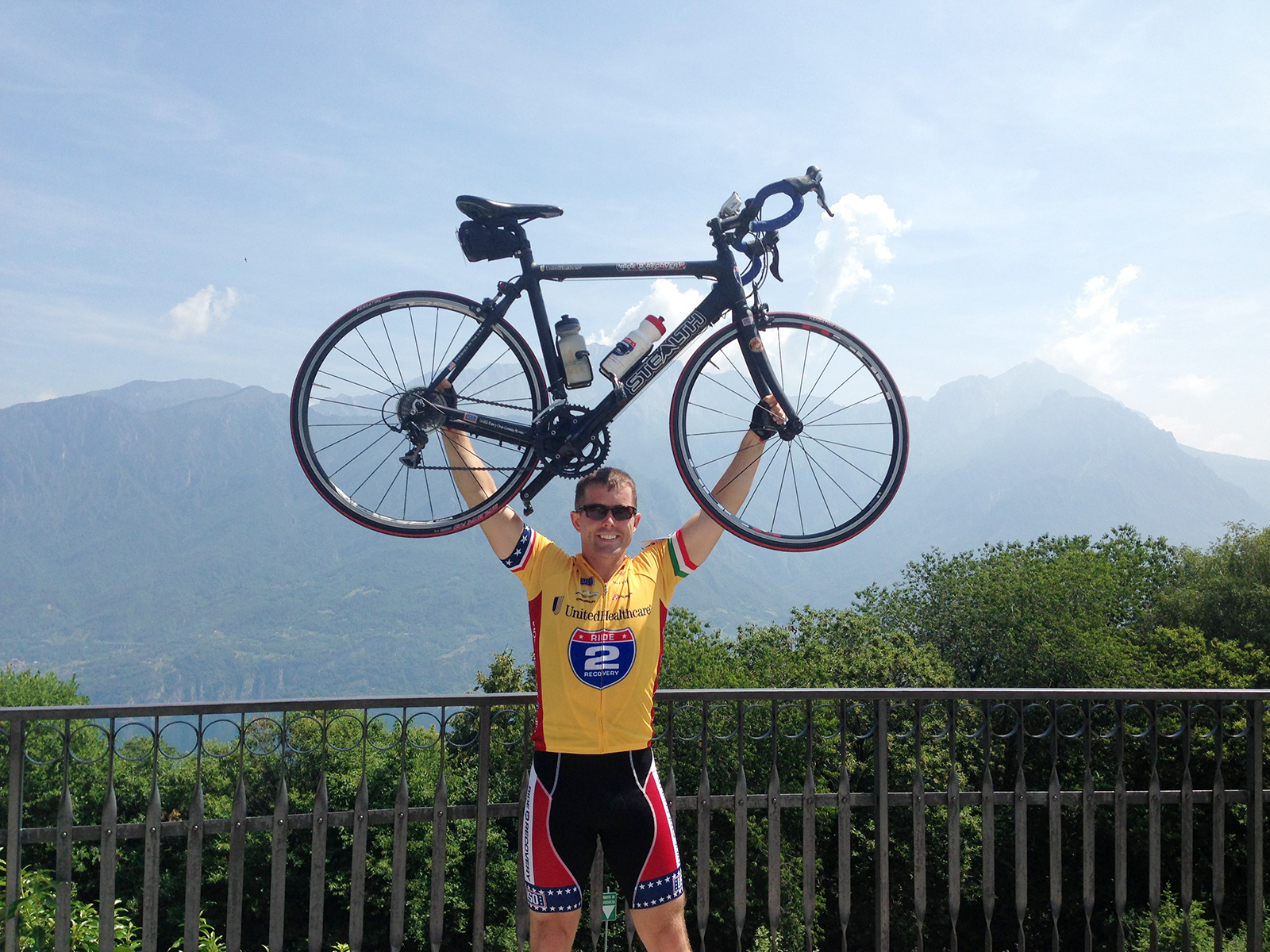 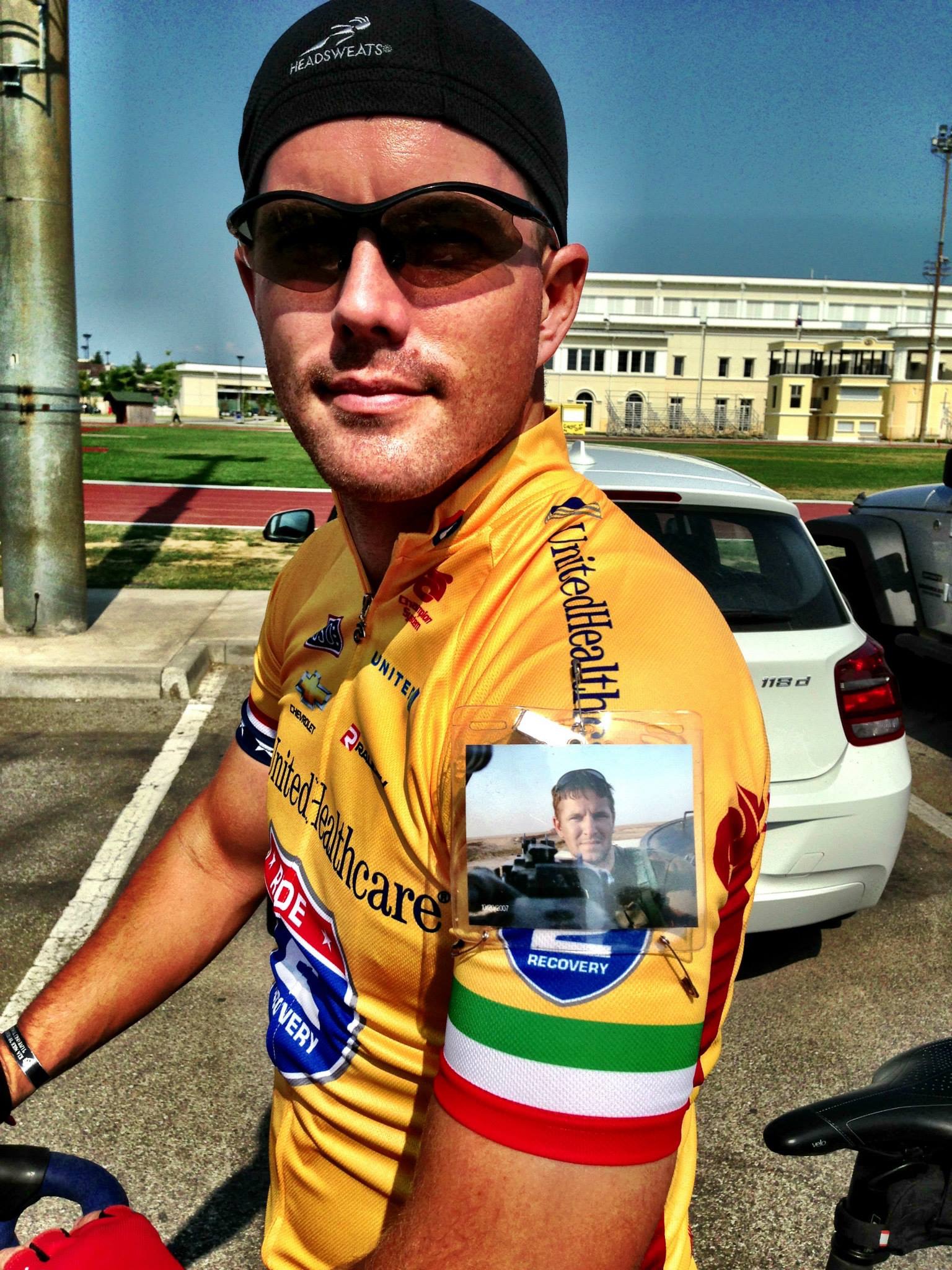 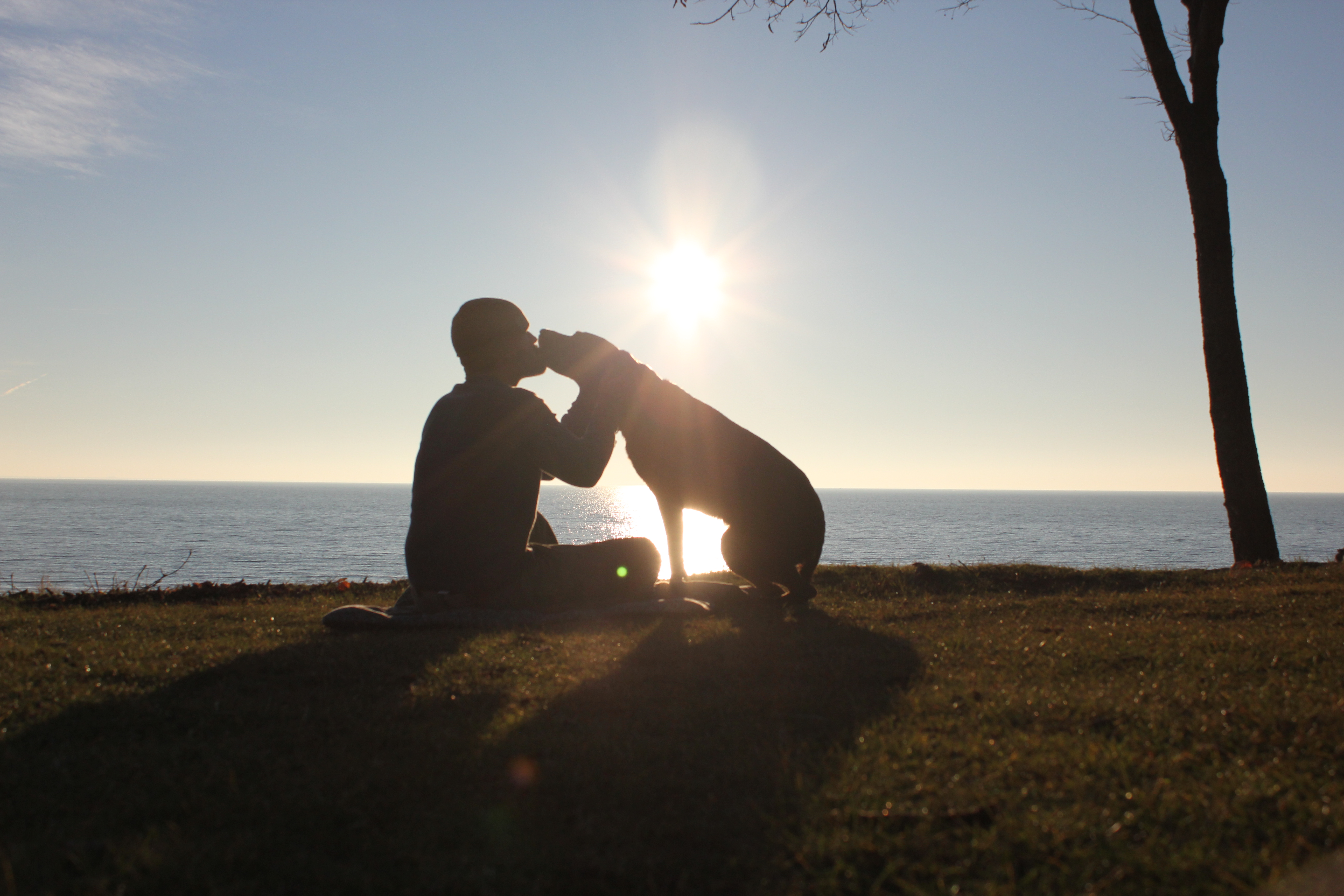 Rob Kugler, a United States Marine Corps Veteran, has been involved in Project Hero since 2011. Throughout the past six years, there has been time away from the bike, but throughout it all, he’s still pedaling. Here is Rob’s journey with his dog, Bella, and his personal story of healing.

The journey continues and gets more incredible with every new chapter. For those that have known me long enough, you know that I have many things that I am passionate about, cycling being one of them.

What you may not know is that lower back injuries and chronic nerve pain that radiates down my right leg caused me to hang my bike  up in 2008. I would sneak in a few recreational rides, but no tearing through the trails with my buddies. The pain was too much.

Then while living in Los Angeles in 2011, I saw a local news station do a story on an organization called Ride 2 Recovery, now called Project Hero.

They covered a group of Veterans who were rehabilitating their injuries through cycling. They weren’t cycling recreationally, they were cycling nearly 500 miles down the coast of California. They weren’t just battling nerve pain in their limbs, they were missing them.

I realized I should be so lucky to just have a leg that hurts when at least I have the damn leg. I had no excuse. I had to do this. I had to adapt and overcome.

When I showed up for the first ride, I was unprepared. I had been riding 20 miles on flat beach trails and the nearly 100-mile day ride through Big Sur was breaking me. Though the bike they provided me was far superior then my “Craigslist special,” my knees couldn’t handle the climbs. Tears rolled down my face as I pushed my thighs down with my hands to keep pedaling.

At one point, my legs completely gave out and I could not unclip, and fell onto the pavement. I was failing. Yet I had a team with me I befriended that had been training in a local group strong enough not only to power through the mountains, but to put a hand in the small of my back and help push me up the hills when I needed it most.

The pain still exists, but it no longer has the power to limit me from what my mind and heart can do.

Fast forward to 2013.  I had been on the bike Project Hero let me take home enough times and put in enough miles riding with my new cycling family in the local Project Hero groups of Long Beach and Hollywood to build the strength to push those who needed it.

I was blessed to get to cycle across California, Texas, Italy and France, and mountain biking in Alaska. That’s right: Italy, around Lake Como, and up the “Passo Gavia in Italy.” In France, we cycled up historic alp d’huez a day before the Tour de France, and we had the opportunity to watch as the teams powered up that famous mountain the next day.

While physical injuries are just the beginning of what cycling with Project Hero heals, the mental benefits are quantifiable and undeniable. Not only was I learning to live a healthier, even athletic lifestyle, I was living a dream along with so many others who would likely never get such opportunities without this organization doing what they do. They are a family, and I was part of it.

But after my divorce and leaving Southern California to move back to Nebraska, I fell out of cycling. I tried to get out on the trails when I could, but I just didn’t seem to have the drive. The high winds and grey skies kept me indoors most of the winters.

I rarely had the motivation to get on two wheels, especially after my dog, Bella, was diagnosed with cancer and lost her front left leg. If she couldn’t run alongside me, I’d rather not ride at all. I ended up getting a carrier for her, but still nothing like the riding I was doing with my team and family at Project Hero. When I was riding with them, for the first time in my life was beginning to feel like an athlete. As time went on, that feeling drifted further and further away.

Then over two years later, while we were out on our travels enjoying beautiful Savannah, Georgia, I learned that Project Hero was cycling from Atlanta to New Orleans. I drove to Atlanta, met up with a friend and fellow rider, and entrusted Bella with his wife and family for the single day that I had signed up to ride.

When I showed up, it was as if I had never left. I’m sure you know that feeling. When you haven’t seen a friend or family member in years and when you do, it’s as if you hadn’t been apart.

How silly I was to think I could show up for only one day! I was hooked for more and Bella was in good hands for the next few days as we rode to iconic locations and even followed the route of Martin Luther King and his march to Selma.

Though I hadn’t ridden further than 20 miles in nearly two years, I was able to stick with the group for the nearly 400 miles we rode before we were held up by severe rain and flooding in Gulfport, Mississippi.

Once again, I was reminded of what I had inside of me if I dug deep enough and what it meant to ride alongside other people, Veterans, First Responders and civilians alike. On the bike, we were all the same. Color, creed, religion, profession, branch of service, all those differences disappear when we pedal stroke after stroke to finish a ride together.

Many people have heard about my journey across the country with my best friend, Bella. What many people don’t know is that the friends that I made through my experiences with Ride 2 Recovery helped make it happen. Five days may not seem like that long, but with each R2R challenge I have ridden, I’ve made connections with countless people I consider good friends I would do anything for, as they would me.

Fast forward again to January, 2017.  I was invited to join the Project Hero Las Vegas Mountain Biking Challenge.  I was hesitant to join because I’m working to focus on writing the story about Bella and my travels but I realized once again that if I drove out there it could be the catalyst I needed to propel me West and to the Northwest to finally finish the trip that Bella and I set out on long ago.

What I didn’t realize, is that my experience here in Vegas would be much more than a catalyst.  It would be a reminder of what I stand for, of what fuels my heart and soul: lending a hand to help another.

I met Josh and Victor, both in wheelchairs without the use of their legs. From two wheels to three, they now crank away on custom-made hand cycles. Yes, they even ride mountain bikes like these custom-designed bikes from Lasher Sport. Josh served in the Army and Victor is a civilian, but while we’re out on bikes, we are all one and the same. They both were injured in car accidents, and just like Project Hero doesn’t discriminate against civilian vs.  military, they never discriminate against how injuries were sustained.

What matters most is their heart and let me tell you that these men have plenty of that. Crank after crank, I was inspired and humbled by these men as they pushed their bodies to the limit. Turn after turn, my heart was smiling as I saw the joy on their faces as they were able to bomb downhill on these bikes that, without Project Hero, they may never get the chance to experience. The support group that rode with them to help get through the narrow passages and up the steepest hills, came together when needed as if they had been a tight-knit crew for years. That’s the beauty of Project Hero: instant community building that turns into lifelong family.

I hope to maintain that relationship and all my Project Hero relationships as long as I’m alive and hope I can do what I can to give back to them. I’ve been able to help raise a few dollars here and there, but nowhere near enough to equate what they’ve given to me.

For so many of the adventures I’ve been on over the past few years, Project Hero was the first to really let me know that if I dig deep enough, my heart can overpower my mind and carry me forward to accomplish things I’d never thought possible.

For that, I am forever grateful – thank you Project Hero and Ride 2 Recovery.