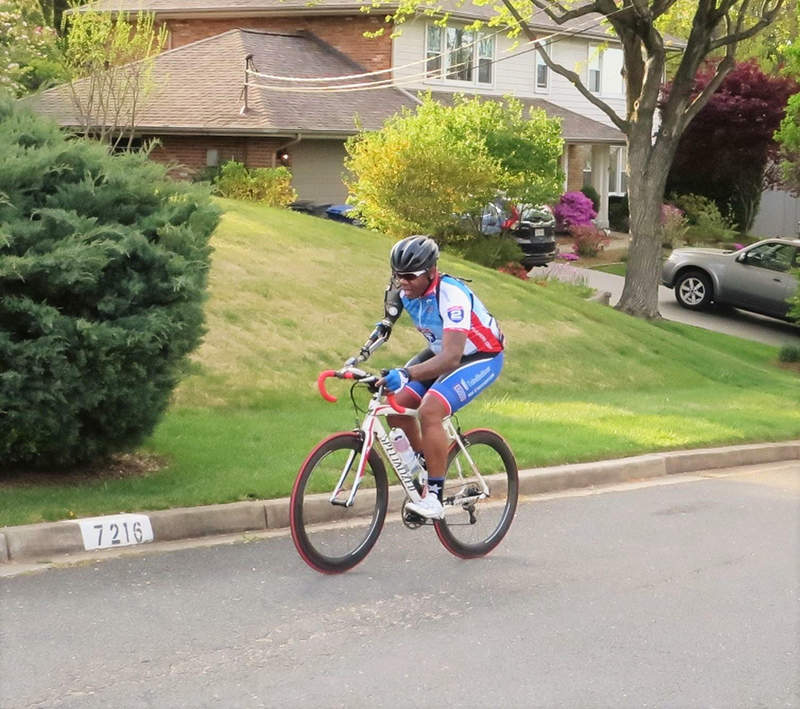 The victim of a hit-and-run motorcycle accident that cost him his arm above the elbow, “I was told I would never compete again, never get to do the sports I loved,” he said.

Despite aches and pains earned from riding his first Challenge, a group ride that had covered hundreds of miles through Texas over five days to reach his hometown of Dallas, Smith’s achievement that day would be only one of his numerous inspiring and unique accomplishments.

“Finishing that Challenge was one of the most difficult things I had ever done and I give my mom all the credit for helping me be strong and get through the tough parts after my injury to get there that day,” he said. “My mom is the toughest woman I have ever known and she was so proud of me,” he said.  “My mom, my best friend and my family were all there, and it was amazing.  Hugging and crying and the whole thing….”

Following the Texas Challenge, Smith became the first above-the-elbow amputee to earn a fit for duty status and continue active duty service in the Army and the first amputee to graduate from Army senior leadership training.  He also participated in the 2015 Warrior Games Men’s Upright Cycling Competition (on a Ride 2 Recovery bike!) and the Invictus Games and has ridden in other Ride 2 Recovery Challenges.  He is currently training for the 2018 Winter Paralympic games skeleton bobsled competition.

Smith had grown up riding traditional 10-speed and BMX bikes, but was more interested in other sports, including basketball and track – until he was introduced to Ride 2 Recovery.

“At WTC at Fort Sam Houston, Jennifer Weatherford said I should ride with them and the R2R program.  They took me to the shop where they fitted me to a bike.  Little did I know, it was way more complicated than the 10-speed I grew up with.”

Turning the cranks on that first ride was a turning point in Smith’s life.

“It was like a release of pressure. I immediately knew I had found the right thing. I needed to find what I could do – it turns out cycling is perfect for me,” he said.

He continued to ride regularly and when Ride 2 Recovery’s Dave Smith told him about riding in the Texas Challenge, he said, “What? I don’t even want to drive that far!” But Smith’s persistence paid off.  “He told me I could do it and eventually I said, ‘well, OK, maybe I can.”

“Cycling has brought so much to my life: I love it so much, I keep my bike with me when I go on the road and ride and train every chance I get,” he said.

Smith is changing perceptions and standards for injured soldiers and inspiring Veterans in a uniquely powerful and dramatic way.

“Before my injury I was searching for my purpose in life.  I realize now that losing my arm was the best thing that could have ever happened. The best thing that ever happened to me was losing my arm, it made me a better person, father, son, friend and solider,” he said.  “We all spend a lot of time searching for our purpose in life: What is my calling? What impact can I have? Now I have my calling: it was made clear to me to inspire, motivate and encourage.”

A recent Army Warrior Care and Transition unit press release announcing his transfer began by noting that Smith’s name is synonymous with resilience.

“Sgt. Smith embodies the spirit of resilience.  He leads others to triumph over adversity in their own unique way,” said Col. Thomas Sutton, Synchronization Director of the Deputy Chief of Staff, Warrior Care and Transition in the release.

Smith is not surprised by the high demand for his services as a motivational speaker. “People who overcome diversity sometimes don’t realize the impact they have on others, even this article is part of sharing stories that help everyone and encourage, inspire and motivate.”

Instead of throwing his life into disarray, his injury changed his life in ways he would never have imagined. “My ultimate goal never changes: to show people they CAN,” he said. “As an amputee I tell people in my situation to work hard and believe in themselves and don’t ever give up.”

His message to other active military and all those suffering from injury and PTSD is to “never let tragedy define who you are,” he said. “You are the hero of your own story, you play the main character in your story. My role is the superhero of mine! And I’m not going to let anyone tell me that I cannot do something.”

Smith continues to play basketball and surprise those who don’t know him. “When I come to a new game, the guys on the court say, ‘You know you only have one arm, right?’ But by the end of three or four games, they are amazed,” he said.

According to Smith, “arriving that day in Dallas was a small moment but a great one.”

His love of cycling has also rubbed off on some important people in his life. “My mom started cycling and she’s a cyclist now too,” he said. “And I love that.”