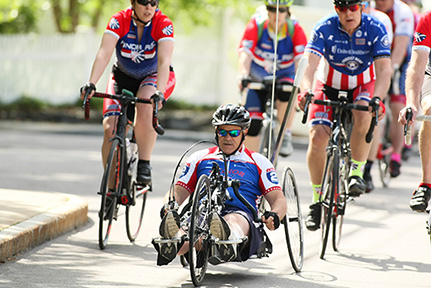 Sponsored by Goodale’s Bike Shops in Nashua, Hooksett and Concord, the event raised more than $80,000 in support of Veterans and First Responders as riders toured the historic and picturesque New Hampshire towns.
Holman Stadium was the home for the ride’s start and finish as supporters rode 50-, 30- and 10-mile courses through the charming streets and tree-lined country roads of the Granite State.
Before the ride started, participants heard from Goodale’s Vice President Ron Bingham and Project Hero participant Kenny Butler. Kenny, an Army Veteran, lost his right arm during his fourth tour of duty, rehabbed with Ride 2 Recovery/Project Hero at Walter Reed National Military Medical Center in Bethesda, Maryland, and today rides his bike with a prosthetic arm constructed from a Fox Shox rear-suspension shock absorber.
Ron Bingham’s story riding with Kenny Butler sums up the essence and success of the 2017 New Hampshire Honor Ride.
“I enjoyed riding with so many of our riders and particularly enjoyed getting to know Ken Butler,” Ron said. “As we rode by a Hollis town line sign, I said, ‘Welcome to hilly Hollis,’ and he replied that his son’s name is Hollis. I inquired how his son got that name. ‘I named him after a fellow squad leader who initially treated me,’ Ken told me. ‘He was an infantry man, a Ranger and a terrific young leader. He and several others used the combat lifesaving skills we were all taught before deploying.’ With a lump in my throat, I could only reply, ‘That’s pretty awesome’ and at that moment I realized climbing Hayden Road really didn’t feel much like a challenge.”
“I hope the rest of the Honor Rides are as successful as New Hampshire. The buzz among our participants is very positive,” said Bingham. “Goodale’s Bike Shop will continue to host this event in 2018 and we are privileged to make it such a great success. From all of us... thank you!”
In addition to outstanding support from the surrounding communities, sponsors and riders, Bingham recognized the efforts of Project Hero staffers Jack Shepard and Noele Wayne.
“For the past three years, Jack Shepard has been the real reason our event continues to run smoothly and everyone involved feels they are participating in a top-notch, professionally run event,” said Bingham. “Noele also did an outstanding job, offering support since last January. Jack and Noele should be recognized for their dedication and hard work.”
“The New Hampshire Honor Ride was a success due to the dedicated efforts of Brad Hill, Ron Bingham, Rick Smith and everyone at Goodale’s Bike Shop.  Their hard work made this ride such a great success,” said Shepard.