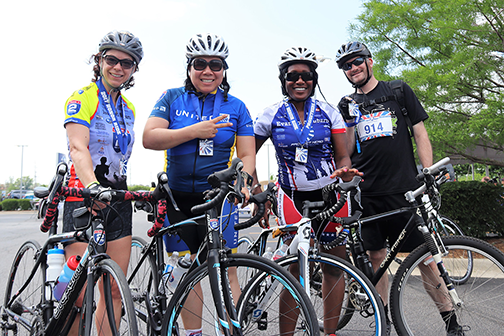 Highlighted by great food and entertainment, the 2017 Chicago Honor Ride started and finished at Evanston Subaru in Skokie and offered beautiful 18-, 36- and 50-mile routes for cyclists of all levels through the area’s beautiful tree-lined avenues and suburban boulevards. Local sponsors also included United Airlines.
“This was a great opportunity for the community to come out and support local Veterans and First Responders and they sure did,” said Paddor, a longtime supporter of Project Hero who has ridden in more than two dozen Challenge Series stages and Honor Rides.  “We had superb weather, great food and drink and outstanding entertainment, all of which, when added to the wonderful support we got from our local volunteers, helped make the event a huge success.”
Local riders included Congress member Brad Schneider and first-time rider Sean Zaloun from the South Side of Chicago who was riding as part of an enthusiastic group of riders from Michael Silver & Company.  Despite only training occasionally prior to the ride, Zaloun completed the short route with ease. “I’m feeling really good,” he said. “I’m already looking forward to next year and I’m going to do the longer route!”
Paddor has been honored for his work on behalf of members of the Military after leading his staff at Evanston Subaru in Skokie to raise and donate nearly $400,000 to Project Hero since 2010.  In recognition of his dedication and service, Rob has been awarded Subaru’s prestigious 2016 and 2017 “Subaru Love Promise Retailer of the Year” awards.
“The Chicago Honor Ride gave our community the chance to see firsthand the benefits and healing Project Hero does for our Vets and to contribute directly to support our Healing Heroes,” he said.