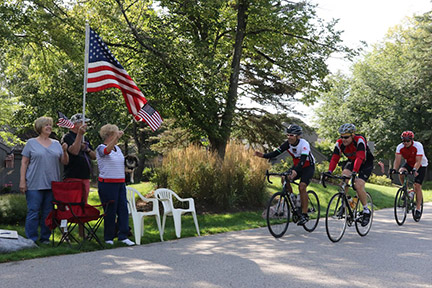 With the support of this year’s event organizers Mark Konicek, Dede Wamberg, Katie Karam, Kathleen Mclaughlin and Colleen Konicek, local supporters, Barrington Hills, Illinois, Mayor Marty McLaughlin, members of the Barrington Hills Fire and Police Departments and the Operation “Wild Horse” Mounted Color Guard sent the riders off in style at the Barrington Hills Park District Riding Center. Stables and riding fields framed the starting gate and the picnic area invited participants to enjoy food, refreshments and ice cream after the ride.
Even though he rides nearly 100 miles a week, 78-year-old Tom Mitchell, a Project Hero supporter from Barrington Hills, felt some butterflies at the start.  “I’m a little nervous,” he said. “But I’m so glad to have a chance to support the organization.”
Honor Ride organizer and Barrington Hills resident Colleen Konicek said the 2017 Barrington Honor Ride has raised more than $50,000.
Josh and Jenny Dillman from Antioch, Illinois, got in some training before the ride.
“We’ve only done a little training but we’re ready to go,” they said before tackling – and completing – the route. “We like supporting our Veterans.”
To support Project Hero and the Honor Ride, a dinner was held the night before the ride at Rolling Oaks Farm for the Challenge Riders and Project Hero Honor Ride supporters.
Hosted by Charley and Sandy Denny, Dick and Judi Duchossois, Mary Galvin, Marimarie and Frank Konicek and Dede Wamberg, the dinner evinced casual warmth and understated elegance and served as a fitting prelude to the ride the next day.
A live band performed following dessert, making it a highlight of the 2017 UnitedHealthcare Great Lakes Challenge and one of the most memorable locations any Challenge has visited.
While the Great Lakes Challenge riders had been looking forward to the Honor Ride, they quickly learned why the area is not called “Barrington Flats”.
“Whoever called you all ‘flatlanders’ needs to take it away,” said Omar Duran after finishing the Honor Ride and hearing the nickname for local residents.