From Shattered Glass To A Rebuilt Soul 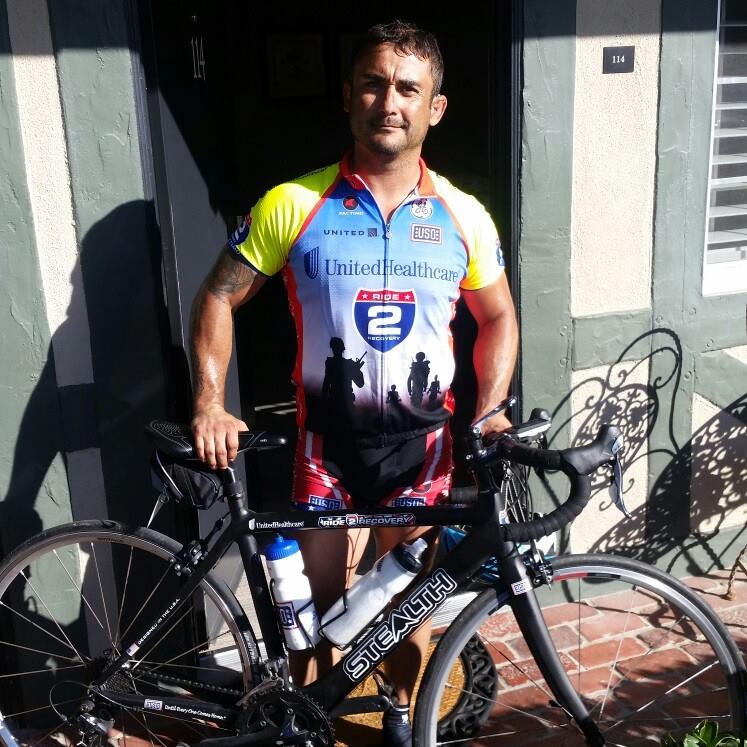 “I went through not really caring about what would happen, which was even more dangerous. If you genuinely don’t care, you have nothing to lose. And I was OK with that, because as much as I did not want to live — I was just done — I didn’t have the courage to do it and leave my children with the memory of their father committing suicide.” –Javier Romo, USMC

These are the chilling admissions of USMC Mortarman Javier Romo, reflecting on his post-Iraq war experiences during a barbecue on a warm May evening in Virginia, during a dinner break from the Ride2Recovery United Healthcare Challenge Series Memorial Ride. He’s come so far during his journey, and speaks about his struggles — past and present — with the ease of a man who has made peace with his demons and knows he now has a working compass on his path to normalcy.

Romo served in the United States Marine Corps from 1998 to 2007, spending a full year in the Ready Reaction Force, training day in and day out before being deployed to Kuwait in 2003. Upon entering Iraq, he was part of a group responsible for the disposal of ordinances found throughout the landscape, making sure they would never be used to harm U.S. troops. “When we moved into Baghdad, there were weapons all over — buildings, schoolhouses… I mean entire schoolhouses filled from floor to ceiling with artillery cannons, shells and all kinds of weapons. This artillery was abandoned, so we had to destroy it because we didn’t want it to get into the enemy’s hands where they could kill Americans,” he explains.

Problem is, there weren’t enough personnel to handle all of the artillery they were finding, forcing engineers on the ground to do a job they weren’t necessarily trained for. “There wasn’t enough EOD [explosive ordinance disposal] guys to properly dispose of the batteries, so they got engineers to do it,” says Romo.

“Engineers are able to build stuff, and they can blow a hole into a building to let you in — that kind of thing. They’re just not trained to destroy artillery. So they started exploding all of these batteries with C4, and the explosions were so repetitive and so big that the Marines in the general area were all getting ill from the pressure change. It got to the point where they were vomiting.”

During this tumultuous time, the life of Javier Romo was forever changed in a single moment. Just as the order was being given to stop the detonations, a series of explosions went off near his position, propelling Romo backwards and through a plate glass window, cracking his skull with such force that his recollection of the following days are lost in the abyss. “The next thing I remember is being on a rooftop, calling in firing missions. I didn’t know if it was a day later or what. I don’t remember anything from that time forward until the memory of the next firefight. I have no idea how long a period that was — whether it was hours or days, or how many days.”

Romo’s brain was injured, and he returned Stateside to attempt to get his life back on track — a task that was doomed to failure as anyone who has suffered TBI (Traumatic Brain Injury) or PTSD can attest. He went back to his job as an investigations manager at a Mervyn’s department store, but soon found himself drinking way too much hard alcohol and getting into trouble with the law. “I was drinking handle bottles of vodka. I was still very active and was working at my job well, but I was drinking heavily and having a lot of nightmares. I saw it as a joke when my roommates would tell me that I was waking up at night and screaming out firing missions and doing things of that nature,” Romo says.

“I started racking up arrests for DUI’s, and violent arrests for assaults. I had an arrest for a terrorist threat that was from a fight where I threatened to kill somebody — I was running my mouth. I was at a point where I didn’t realize I was still as aggressive as I was when I was on active duty in war. I responded to everything that way. I didn’t have the ability to process something, especially in a hostile environment. I just went off immediately. And the arrests that I had were only the ones I was caught for, but the amount of times I was out of control was much more than that.”

A cry for help went out to the VA, who saw Romo and prescribed extremely strong anti-psychotic pills, of which he was taking anywhere from six to 12 at a time. “So my life went from a point where I was getting in a lot of trouble because I was so aggressive and out of control, to now where I was basically a zombie,” he explains. “My son, who was seven or eight at the time, would have to walk me to the bathroom because I was bumping into walls. It started to get even worse because the alcohol began to come back into play, so now I’m even more depressed because I’m freaking pissing my pants, thinking this is what I’m going to be like.”

In order to survive, Romo needed a purpose. A sense of belonging. A place where he would be accepted and be among others who were struggling similarly with life after war. He found all of that and more in Ride2Recovery. “Ride2Recovery helped me to find something — a community — that was going to support me in an activity,” he explains. “They gave me something that said, ‘You don’t have to take all of those medications.’ This [R2R] is going to make you function better and you’re going to have a support group of people.”

Ride2Recovery has become more than just a support group, though, and Romo has become more than just a member of the organization. He has a deep, almost spiritual understanding of what R2R has done to rescue him from pills, booze and suicidal thoughts, and takes every opportunity afforded him to evangelize to other veterans, who he feels can also find their elusive inner peace.

“Usually what I do when I’m talking to a veteran who I think needs something like R2R, or a veteran who I think would really thrive in this environment — because not everyone would — is to share my story of what it did for me, and where I was,” he calmly states. “I think it’s important to share those things, because that’s what really hits home. There isn’t a veteran anywhere that deep inside doesn’t want to get better. They all want to get better. Even when they’re in that hole where nothing matters and they don’t care about anything, there is always a little glimmer where they want to get better. Seeing a community that is so accepting, non-judgmental and supportive is what really drives veterans to come and join. I believe in it so much because of what it’s done for me.”

Project Hero Magazine will be providing more interviews and stories from Ride2Recovery participating veterans throughout the coming months. Please check back soon for the next installment, and thank you for your support.