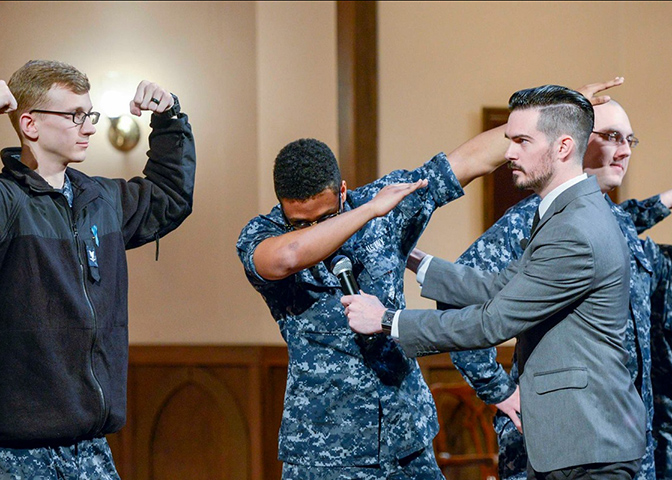 April is National Sexual Assault Awareness Month, so HEROES takes a look at the Navy’s innovative approach to help eradicate sexual assault and military sexual trauma.
Benjamin Kaufman, son of Project Hero Director of Operations Candace Kaufman, is currently supporting those who serve by participating in a unique theater company called Pure Praxis, which conducts live-action training to help U.S. Navy sailors avoid, mitigate and deal with sexual assault.
“It’s all hands-on training. We engage with the audience and they participate with us in the performances,” said Kaufman.  “Training by videos or lectures is not what we do, we bring the audience members to stage and help create a sense of accountability on stage they can carry with them when they go out into the real world.”
In its current script for the Navy, Pure Praxis creates that accountability by helping sailors try out ways to identify and deal with situations that require intervention and gain perspective on those actions. “It’s not easy being the one to intervene and it doesn’t make you popular socially, but when other sailors witness them acting like that, they’re more likely to do the same thing.”
Contracted by the Department of the Navy Sexual Assault Prevention and Reponse Office, Pure Praxis’ mission is to create effective social change through theater and performance.  Their performances feature five actors and two facilitators on stage who serve as narrators and interact with audience and participants and the company is currently touring the US before traveling to Guantanamo Bay, Japan and Guam this year.
Audience feedback shows Pure Praxis is on the right track.  “Survivors in the audience basically all say “we are not defined by what happened to us,’ and that’s one of our key messages,” said Kaufman.
“In one of our scenes, we have an aggressive character who verbally assaults a female survivor of sexual assault,” he said.  “We work with the sailor to create an intervention strategy, like creating a physical barrier, threatening to go up the chain of command, calling others to witness or putting it into perspective by asking them if they would victimize their sister or mom like that.”
In addition to its current work with the Navy, Praxis is developing a script for a show on post-assault retaliation.  “The current show focuses on pre-assault, but we have seen an increase in reporting because people are more comfortable reporting after training like ours,” he said.  “And in the new script, we’ll highlight other sailors retaliating against the survivor who filed the report and teach how to be supportive allies in those moments.”
Kaufman’s involvement with Praxis began while he was a theater student at California State University Long Beach after Praxis earned a contract with the Navy so was auditioning new cast members from the University’s theater department.
“I was actually assistant directing in the theatre when a friend who was auditioning walked past our rehearsal, came in and told me about Praxis.  I left my rehearsal and went and auditioned and got the part,” he said.  I had no idea what I was getting into except that they performed for the military, but that was about it.”
Working with Praxis aligns with Kaufman’s personal goals.   “That’s why I joined Praxis: I love theater that brings about change in people, that has an effect on people and that’s not just entertaining but makes them want to change and deal with issues in society.”
Kaufman’s message to Project Hero participants and supporters is in harmony with the messages Pure Praxis conveys in its shows.  “You are not alone,” he said.  “We support you and are working in every way we can to eliminate sexual assault and violence in the military.”
“It feels great to give back to service members who are sacrificing for us,” he said.  “And it’s gratifying when they thank you because they feel they are not alone and being defined by that event.”
More information about Pure Praxis is at https://www.youtube.com/watch?v=epxPGy1RF8M and www.purepraxis.com.
Benjamin’s mom should be proud.