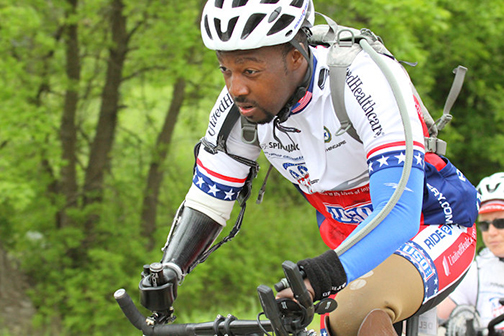 Delvin McMillian had one question for the Ride 2 Recovery team, “how can I join the ride?”

UnitedHealthcare employee, Walter Chwalik, told Delvin about the Ride 2 Recovery and showed pictures from his ride in Florida.  Our question at R2R was “how can we make a bike that will allow Delvin to ride independently?”

Since 2008, Ride 2 Recovery has been providing grants for the bikes that are given to the injured veterans - but they had never had a quad amputee apply.  That didn’t stop anyone.  It was just another challenge to create a bicycle that would allow Delvin to participate in what is a life-changing experience for the riders.

Delvin McMillian and his fighting spirit was not squashed when he contacted the Hantavirus in 2001 in his dorm room at Mountain Home Air Force Base, Idaho. The disease attacked his circulatory system and caused his lungs to collapse and his kidneys to fail. Both of his legs were amputated, below the knee, and one hand and a part of the other hand were amputated.

“Life doesn’t stop at the point of your injury,” he said. “In the big picture of life, it is just a minor setback. There is more to life than feeling sorry for yourself and you still have a lot you can offer the world.”

The Ride 2 Recovery program was founded on the principle that anyone, anywhere, anytime could ride some kind of bicycle and that R2R could make the necessary adaptations. The R2R team was up for the challenge of creating a bike for Delvin.

Only a small handful of quad amputees had ever even attempted to cycle and none of those had ever ridden a road bike of any sort. After months of research, brainstorming and hard work, the Ride 2 Recovery Stealth “Mad Max” was born. The bike had to steer, brake, shift, and ride easily and smoothly for someone who had no legs or hands to steer, brake or shift.

Delvin has now ridden Mad Max in Virginia, Texas, Florida  now has the opportunity, as a quad amputee, to do something that any able body person can do, which is to ride a bike. Many people told him and the R2R team that this was not possible.  Delvin proved them all wrong.

Delvin is a Quad amputee and came to John Wordin and R2R after he was told it was not possible for him to ride a bike. His bike uses a very special unit on the handle bar that incorporates Shimano DI2 Electronic shifting and Hydraulic disc brakes into a very unique and 100% custom “control center” that allows him to steer, shift and brake with precision and ease. The C85 prosthetic hand uses a specially adapted Thomson seat post as a mounting unit for the prosthetic. With his prosthetic legs He can pedal as normal.