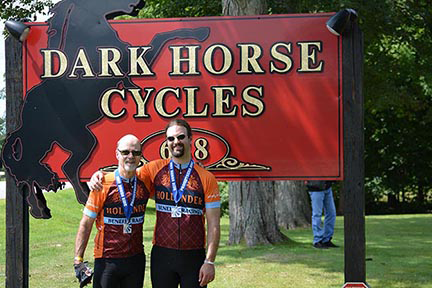 The 3rd annual Project Hero Bx3 (aka Bike-BBQ-Beer) Ride was held on August 20 at Dark Horse Cycles in Montgomery, New York. Ninety five cyclists from around the country formed a patriotic peloton in support of Healing Heroes on a gorgeous 80-degree day, riding an out-and-back 30-mile route and raising more than $10,000 for Project Hero programs.
“It was a great day to serve those who have served our country, enjoy a fun route and come together as a community over great food and drink and shared purpose,” said Jack Shepard, of Project Hero, the organizer of the ride.
The participants were welcomed when they arrived with fresh donuts and coffee. The roll-off program included an impressive rendition of the National Anthem by local artist Joslyn Shepard and a moving speech by Project Hero participant Kevin Binkley.
Riders were escorted by the ride Defiant Crew Motorcycle Club as they enjoyed the beautiful rolling hills and scenery of upstate New York. Local favorite Twin Cone provided ice cream for all riders at the turnaround point.
“We thank our sponsors, including Dark Horse Cycles, Walden Savings Bank, Newburgh Brewing Company, Enviro Clean, Defiant Crew Motorcycle Club, Coldenham Fire Department and the Cauldron Restaurant and Bar, for supporting our Veterans and First Responders and helping to bring the community together at this great event,” said Jack Shepard.
When the riders returned, they enjoyed delicious B-B-Que brisket, hamburgers, hot dogs and salads sponsored by George Zubalsky and Mike Rave, owners of Dark Horse Cycles, and pit-boss Earl Smith. Singer Mike Mack provided great live music throughout the afternoon.
Special recognition for helping make Bx3 a success goes to Derrik Wynkoop, president of sponsor Walden Savings Bank, who provided the limited-edition Project Hero pint glasses offered as fund-raising incentives before the ride and drove SAG during the event; Paul Halayko, president of Newburgh Brewing Company, who supplied the beer; and the Walden Savings Bank volunteers organized by Amanda Morgewicz who served as escorts for the ride.