BOARD OF DIRECTORS: NEW MEMBERS 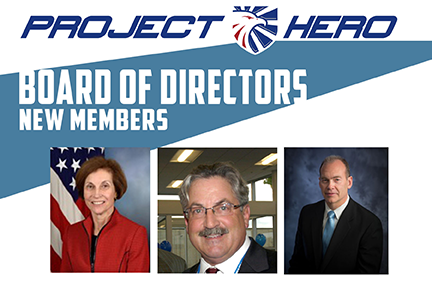 CAMILLE NICHOLS
Camille Nichols is the Vice President of Business Operations at Fluor Government Group. She retired as a Major General from the U.S. Army after serving in various Engineer and Department of Defense Acquisition roles in both leadership and staff positions in the United States, the Far East and the Middle East. Camille also served as the Director of the Department of Defense Sexual Assault Prevention and Response Office. Prior to that assignment, she was the Deputy Commanding General of the Army’s Installation Management Command in San Antonio, Texas.
With more than twenty years of experience in Department of Defense acquisition, her acquisition assignments have included Commanding General, Army Contracting Command; Program Executive Officer, Soldier; Commanding General, CENTCOM Contracting Command; Commanding General, Expeditionary Contracting Command; Senior Military Assistant to the Under Secretary of Defense (Acquisition, Technology and Logistics); Joint Program Manager, Guardian; and Product Manager, 2nd Generation FLIR.
Camille has a wealth of experience in managing large organizations and spends time coaching and mentoring high-performing individuals to become more effective leaders and valuable citizens by positively impacting their organizations, colleagues and communities. She is a frequent public speaker covering topics on effective leadership, the importance of diversity and inclusion, and the power of STEM education.
In addition to earning a doctorate in Engineering Management at George Washington University and a B.S. degree in Engineering at the U.S. Military Academy, Camille has also earned master’s degrees in Safety and Systems Management at the University of Southern California, in Strategic Studies at the U.S. Naval War College, and in National Resource Strategy at the Industrial College of the Armed Forces.
An avid cyclist, Camille was also a member of the 1984 Olympics US Women’s Team Handball Team.

ROBERT PADDOR
Robert Paddor has been President of Evanston, Illinois, Subaru since 1996 and moved and built a Signature Facility in Skokie, Illinois, in 2009.  Paddor has supported Ride2Recovery/Project Hero since 2011 as an Ambassador and has hosted Honor Ride Chicago at his dealership the last four years.  Additionally, Paddor has served on the Board of the USO of Illinois since 2011, Skokie Valley Rotary Board since 2010 and the Foundation Board of the North Shore Center of the Performing Arts since 2013.  Evanston Subaru was the recipient of Subaru of America’s 2016 Love Promise Retailer of the Year highlighted by their work with Ride2Recovery/Project Hero.  A native of Illinois, Paddor graduated from Tulane University and although he never served in the Military, he’s happily serving them now.

BILL SPURGEON
Bill Spurgeon is President and Chief Executive Officer of the Dover Fluids Segment of Dover Corporation. Prior to his current position, he has held various segment leadership roles in the Oil and Gas and Industrial businesses of Dover.
Bill began his career with Dover in 1993, with assignments in Louisville, Kentucky, Tucson, Arizona, and Milwaukee Wisconsin.  Prior to Dover Bill worked for General Electric and Hercules Aerospace.
In addition to his support for Project Hero, Bill serves on the Board of Directors of USO of Illinois and Camcraft. A native of Missouri, Bill graduated from the United States Military Academy-West Point and served five years in the U.S. Army as a helicopter pilot. He earned his MBA from the University of Tennessee. Bill and his wife have two children and reside in the Chicago area.

A Message From Bill Spurgeon:
I am from an Army family with my father being a 30-year enlisted soldier.  I followed in his footsteps, serving 9 years, 5 in the Army and 4 in the Utah National Guard.  The tradition continues with my son entering the Army in May of this year.
I was introduced to R2R/Project Hero at a USO event in Chicago.  I became very excited by the program because it addressed two of my passions: supporting our Veterans and biking.
I also love riding, but had not been on a road bike for 15 years when the opportunity to join a Challenge came up.  I trained, lost some weight and got to ride the Army/Navy Challenge and the Texas Challenge the following year.
What a great experience!
While the riding was great, it was the camaraderie, teamwork, and people that had an impact on me.  Each night, the group I came with from Chicago would share the stories of the healing riders they heard from that day.  They were amazing, and we became believers in the program and the Project Hero team and wanted to be a part of the program.
While some on the ride may recognize me, almost all will know my wife Diane, who loves to volunteer, serving the riders, the staff and the service dogs.  My third passion is being addressed this year in the morning reflections led by Mikey Arroyo and Jonathan Dade.
I am really looking forward to the Great Lakes Challenge where I hope to meet many more of our heroes!