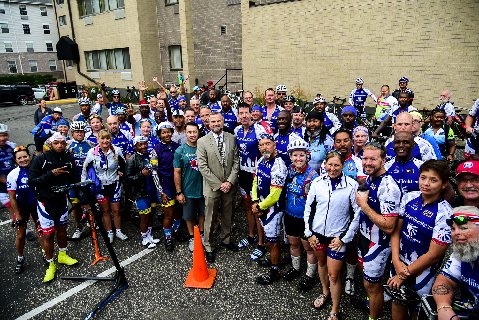 Today marked the first time in all of this year’s Challenges we experienced rain. We were joined at the start by John Rohrer, Director of the Madison VA and Rob Paddor, one of the great friends and supporters of Project Hero.

The route was much flatter and a brisk tail wind made for a nice riding pace. The last part to Lake Geneva was very scenic as the weather vastly improved.

We were joined at dinner by our new Board member Tom Abraham, whose generosity is helping us open our new HUB in Miami.  Rob brought two guests to dinner, 93-year old Navy Veteran Des Johnson and his wife Joan.  Des spoke to us about his experiences fighting the Japanese in World War II and humbly claimed that he was not a hero, but after hearing him, with all due respect to Des, there is not one of us among our Project Hero family who would agree.  He inspired us with his remarks and we hope he will keep riding his bike and challenging Rob in sailing races on Lake Geneva for many years to come.

To finish off this excellent day, Rob also arranged for buses to take our group into Lake Geneva to enjoy a night on the town.

One of our long time riders who has been away for awhile is Tanner Hoag. Tanner lives in Galena, IL. As a result of exposure to several IED and rocket blasts, he suffers from PTSD and TBI.  He began riding with Project Hero in 2014 at the Warrior Transition Unit in Fort Leonard Wood, MO Project Hero groups.

Tanner served in the U.S. Army on combat tours in Iraq and Afghanistan and as a Peace Keeping mission in Kosovo.  He also served two tours in South Korea. He was wounded by an IED roadside bomb in Iraq in 2003, nearly losing his right arm as a result of the explosion. After nine months of recovery at Walter Reed Army Medical Center in Washington D.C., Tanner continued to serve our country. During his career, he served 18 years as a Military Police Officer including special assignments as an AIT Instructor at the U.S. Army Military Police School and as a Police Intelligence Operations NCO at the USFK Combined/Joint Provost Marshal's Office in Yongsan, South Korea.

“I was out on my own trying to do retirement and separation from the service and it was really hard doing that by myself,” he said.  “And then I learned this is a family and a great group that I’d recommend any Veteran who needs help to join.”

Since retiring from the U.S. Army, Tanner has been studying Psychology with a goal of becoming a Psychologist.  “I want to help Veterans who are struggling through difficult times and help them become mentally tough again,” he said.

After Tanner’s first ride with Project Hero at the 2014 Memorial, “John Wordin surprised me when invited me come to Normandy.  It was a great experience for me. I didn’t expect that as a newcomer and it was unforgettable.”

“I feel pretty strong,” he said at today’s lunch stop in Whitewater.  “Every Challenge I’ve been on I’ve learned how to ride my bike and Thom Smith has been especially helpful to me this week.”

As for the rest of the 2017 Great Lakes Challenge, Tanner is feeling confident.  “My goal is to keep riding through the week especially since the next days are the fun ones!” he said.

We are proud to have Tanner with us on the Great Lakes Challenge and thank him for serving our country and keeping us safe.