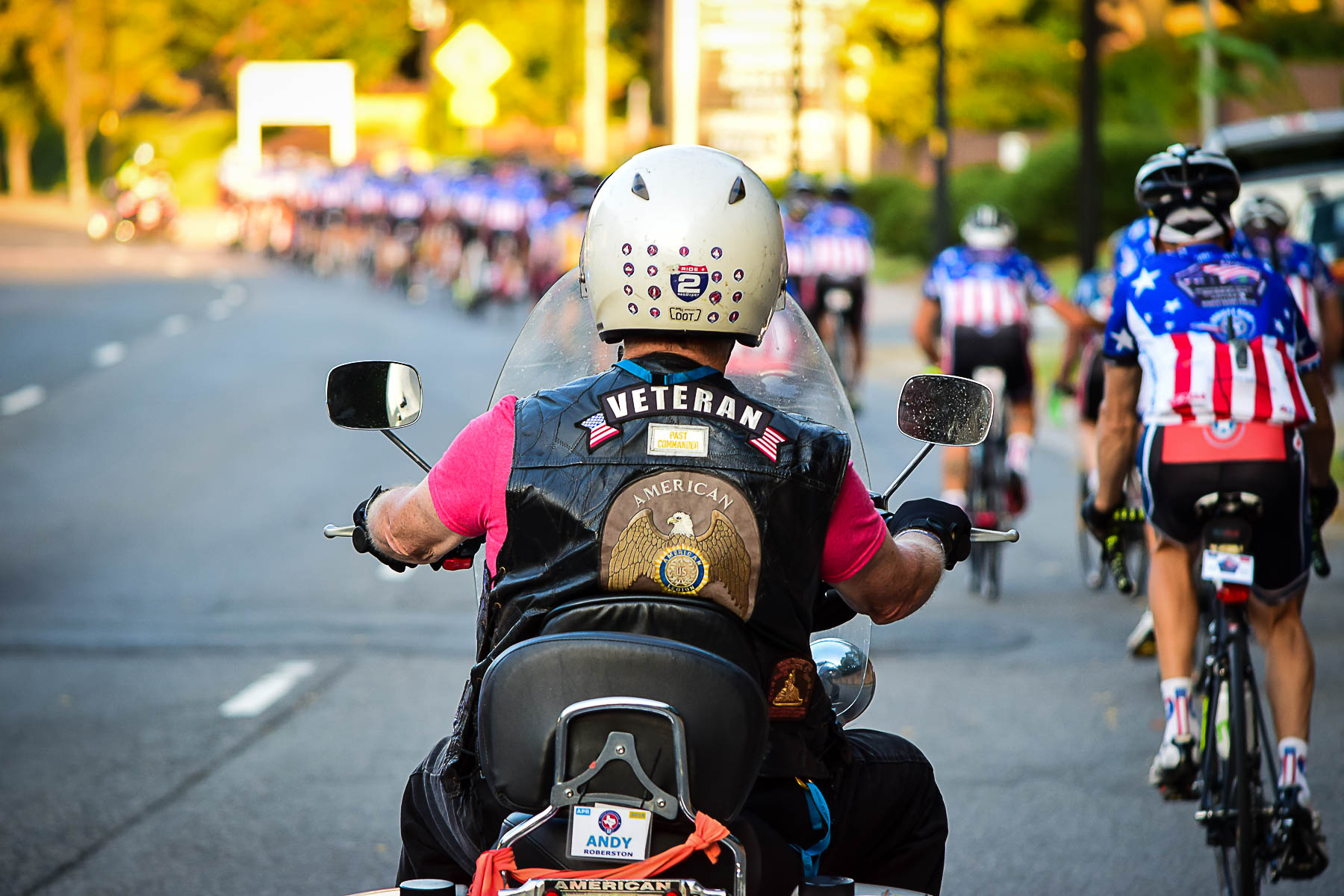 Early in the history of the outfit then called Ride 2 Recovery,  Tom Wahl and J.R. Dye rode out from American Legion Post 10 in Manassas, Virginia, to offer their support as road guards for the bicycle warriors healing across America.
These members of the American Legion Riders provided a cushion between the traffic and the groups as well as helped at intersections to allow all the bicycles to pass without stopping; a difficult stop-and-go process particularly for some missing limbs.
As R2R grew, sometimes into as many as 200+ riders, Tom Wahl reached out to other members of the Virginia Legion Riders and the team grew to five motorcycles with Gary Hilton, Rick Wooddell, and myself joining the cadre.
As trust grew between the staff leaders and their escort, we were asked to join them on more and more rides until we routinely participated in all the rides east of the Mississippi.  Highlights included the first 9/11 ride, Army/Navy Challenge and about five years ago, being invited to Texas, where the team has participated ever since.
Change comes to all groups, of course.  R2R changed to Project Hero with their extraordinary vision of support through the VA hospital system, Tom and Eric left the team and Ken Culwell from Kentucky signed on as the Challenges morphed into three groups and about 100 bicycles each time.  Police support grew as the nationwide recognition of this extraordinary program became known.
Rumor has it that uniformed officers came to ride escort for these Veteran warriors even on their days off to honor their bravery.
Because the American Legion is open to all members of the Armed Forces who have served on Active Duty, team members are all Veteran in their own right.  While older than most riders, they have always been made to feel most welcome by everyone, particularly the extraordinary staff who have made them feel like part of the family.  Each of them have their own stories and have learned to share and listen to the friends they have made along the way, perhaps the greatest source of healing derived from these outings.
I’ve been doing this for eight years now and can’t imagine a greater opportunity to serve these warriors and support their wonderful caregivers who join us on the road.  We have watched them grow in so many ways: getting married and having children, going back to school, winning medals, running marathons, and just generally stealing our hearts and touching our souls with their gentle courage.
It continues to be the greatest honor of my life.