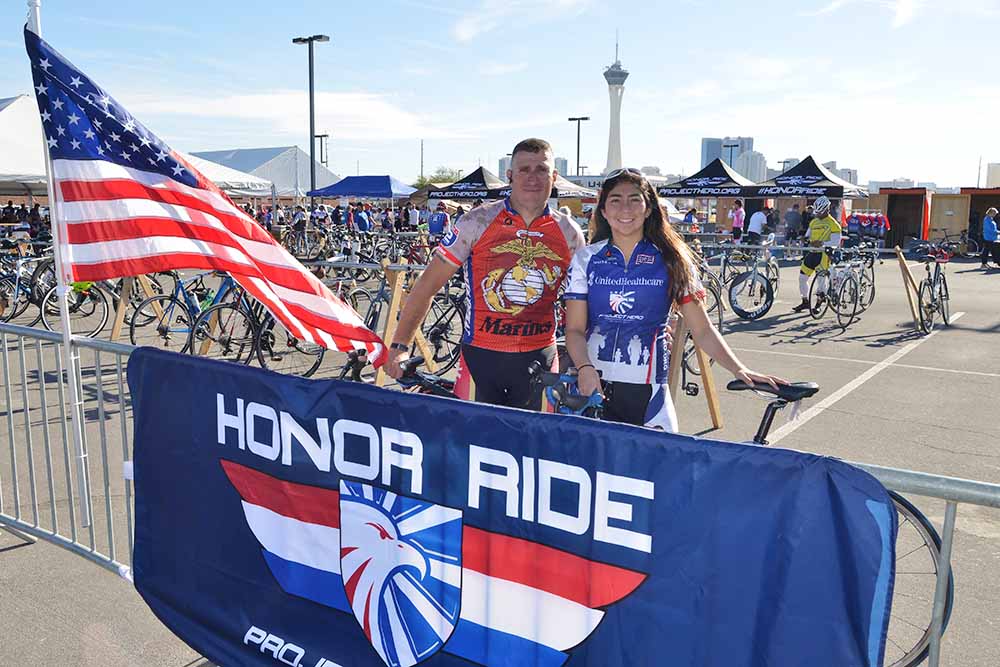 Nearly 700 cyclists took part in the 2017 Optum Honor Ride Series Las Vegas, riding on Veterans Day down the legendary Las Vegas Strip to honor and support America’s Finest bring attention to the national mental health crisis created by PTSD and TBI.
Rolling through Las Vegas for the 8th time, the 2017 Optum Honor Ride Las Vegas raised more than $10,000 and featured a patriotic peloton riding under gorgeous blue skies on bike-friendly routes of 19, 41 or 62-miles, followed by great food and live music after the ride.
“It’s a fun ride and it’s the camaraderie that makes it so great!” said Marine Veteran and Project Hero HUB rider Patrick Kelly.
The Optum Honor Ride Series gives communities throughout the nation the opportunity to ride alongside America’s Healing Heroes while raising funds to help Veterans and First Responders suffering from PTSD.
Free for injured Veterans, the self-paced ride was highlighted by recognition of several victims of the recent Las Vegas shooting tragedy and a colorful patriotic peloton of hand cycles, recumbent cycles, custom tandems and traditional bicycles.  After the ride, riders and supporters enjoyed a festival-like atmosphere including lunch and live music.
Local Veteran Sam Efnor saw a flier for the Honor Ride at Las Vegas Cyclery and joined the event with his wife, Melody. “It’s important to show my appreciation,” he said. His wife was impressed by the impassioned opening words and the festive feel. “We would certainly do it again,” she said.