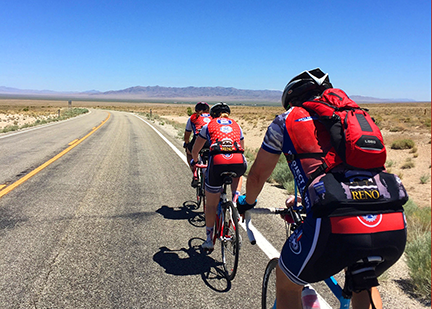 Nicknamed BRAN — for bicycle ride across Nevada — the seven-day challenge began in South Lake Tahoe at Stateline; journeyed through Nevada’s historic towns, including Carson City, Fallon, Austin, Eureka and Ely, traveling the same route used by the Pony Express and Overland Telegraph in the 1860s; and finished at the Nevada-Utah border.  The inaugural BRAN was designed to include less than 15 riders plus support and gear (SAG) to test the concept and route for possible future events.
Our ride kicked-off on June 17 with a 26-mile route from Stateline to Silver City RV Park in the Carson Valley where a Minden GEVN-sponsored Barbque welcomed our group, which included several supporters who rode with the group for one day.  Day two featured an early start for the 75-mile ride from Silver City to Fallon Naval Air Station and, after a ride in nearly 100-degree heat, the swimming pool at Fallon NAS was a wonderful way to end the day.
Things really started to heat up on day three. After a flat and fast initial 20 miles from Fallon NAS to Sand Hill, the group – and the temperature — started climbing.  Although riders were only 24 miles from the next stop at Middlegate Station, the 100+ degree heat put a couple of our riders into the SAG vehicles. After dealing with the heat, Middlegate Station was a welcome site and we set up camp under 100-year-old cottonwood trees.  We all enjoyed much-needed $3 showers and Middlegate’s famous and delicious signature burgers that evening.
We had another early start the next day after deciding the night before to alter our route from Hwy 722 and remain on Hwy 50 to allow for breakfast at Cold Springs Station. Since they graciously opened early for us, our SAG support crew pitched in to help the Cold Springs staff cook, serve and wash dishes.  The heat took its toll again as we climbed up New Pass Summit, shortly followed by another climb to Mt. Airy Summit. The reward, however, was a beautiful view of the magnificent Toiyabe Range, just 20 miles away.
That was an awfully long 20 miles as the heat increased substantially during our descent from Mt. Airy.  But then we got lucky: an afternoon thunderstorm and the cloud cover that accompanied it really helped during the final climb into Austin and our arrival at the Lincoln Motel.  We enjoyed dinner that night at the historic International Hotel, which claims to be the oldest hotel in Nevada. Originally built in Virginia City in 1859, the International was moved to Austin in 1863.
Our fifth day began with two major climbs over Austin Summit and another climb 20 miles into the ride that brought us over Hickison Summit before the route flattened out over the next 40 miles.  After lunch at mile 37, we made the final push into Eureka, one of the best-preserved historic mining towns in the American West. Many of its buildings are impressive, but the city’s architectural jewel is the recently refurbished Eureka Opera House, which was built in 1880 on top of the smoldering ruins of the burned-down Odd Fellows Hall.  The Opera House’s grand opening was celebrated with a New Year’s Eve gala masquerade ball and it now welcomes small conventions from around the state, performances by nationally recognized artists and dinner theater.  Next door is the 1877 Jackson House, which has been restored to its original elegance, featuring Victorian bedrooms upstairs and a bar and gourmet restaurant downstairs, and the splendid Eureka County Courthouse across the street has been restored to its original 1879 condition (albeit with a 1995 foundation).
The toughest day of our journey followed as we climbed four passes during the 77-mile ride to Ely. SAG support was crucial — our support crews expertly planned our lunch break and rest stops to ensure we could get through the long, hot day.  Sixty miles into the ride, we reached the final pass at Robinson Summit and after a break, we began a glorious 17-mile downhill finish, reaching Ely within an hour and finishing at the Jailhouse Hotel and Casino. At our meal that night at Racks Bar and Grill, we swapped stories and began to realize sadly that the end of our ride was near.
Our final day took us on a 65-mile ride from Ely to the Border Inn on the Nevada-Utah border. The first 20 miles were flat and the cool morning air was invigorating.  The final two passes between Ely and the Border Inn included Connors Pass, which tops off at 7,700 feet, and then the final climb to Sacramento Pass at 7,160 feet.  With 7 percent grades for the last two-plus miles, Sacramento proved to be a tough climb.  We enjoyed a final lunch stop before the 6-mile descent to the Utah border that culminated our journey, then loaded up our bikes and SAG’d back to Ely for a celebration dinner.
Our riders were supported by George Feriend, US Air Force Veteran and Project Hero Reno; Bill Meacham from Reno, NV; Terry and Cindy Rhiley from Elko, NV; Grace and Kor Chho from Longmont, CO; and Ada DeZerga from Minden, NV.
We rode a total of 417 miles over the seven days, which included an impressive 20,000 feet of climbing. As we traveled along Nevada’s infamous Highway 50, the original route of the Pony Express and Overland Telegraph, we saw the ruins of the “Stations” that transformed our nation’s history as westward expansion brought with it opportunity and fear and death during the Paiute/Shoshone Indian War of 1860.
Although dubbed the Loneliest Road in America in a 1986 Life magazine article, we were far from lonely. We had started as strangers to one another, but came away with a sense of comaraderie, friendship and honor. One cannot help but be transformed by the beauty Nevada’s open desert holds. There is no better way to see it than by bicycle while accompanied by several of our nation’s Heroes. Our group is already planning BRAN 2.