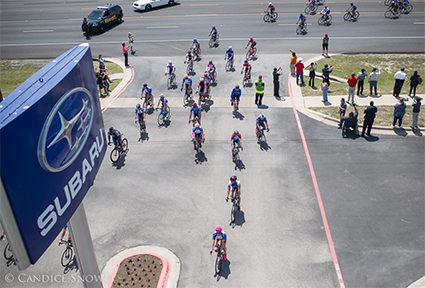 Day 3 featured the shortest ride of this year’s UnitedHealthcare Texas Challenge. The 40-mile ride saw the wind change directions from a tailwind to a headwind, which made for a more difficult day.

We began our day with our annual visit to the Georgetown Police and Fire Department Headquarters, where we were welcomed by Mayor Dale Ross, the County Sheriff and Police Chief and employees and members of both departments.

This evening we enjoyed dinner at the Ft. Hood Officers Club where we were welcomed with inspiring remarks Gen JT Thomson made even more motivating by his announcement that he would ride with us from Ft. Hood tomorrow!

Today was Women’s Day and there are two riders who embody the spirit and mission of Project Hero, April Lage and Valerie Gambino.

April Lage is an Army veteran with 11 years of service to our nation and following injury, met her husband, Project Hero rider Michael Lage, who encouraged her to ride with us.

“My PTSD was getting bad and although I had pushed Mike into sports, I was pulling back into depression.  Mike said “come on out and ride!” but I had never thought about riding a bike -- that’s what you do when you are a kid!” she said.  “After my first ride I said “What the hell am I doing?” But when I finally managed to finish a longer ride of 42-miles, I was ecstatic.”

April then took some time off to recover from back surgeries and realized she wanted to return to Project hero.

“Project Hero is my second family.  It gives me the opportunity to push myself, to challenge myself and to overcome being my own worst enemy and my thoughts and demons. It gave me the ability to sort that stuff out,” she said. “My bike is my sanity mobile! There is something about the nature of being able to accomplish things when you ride you have the ability to just think. It’s freeing.  You don’t have a choice to deal with the jumbled stuff in your head, but you have the calmness to deal with it. Project Hero did that for me.”

This year April is having a great experience in Texas. “I’m highly impressed with myself! Even today, I still had enough wind to motivate others and that’s what gets me going and keeps me going,” she said. ”It’s a family where no vet is alone.  I like what others have done for me and want to do that for others, otherwise I’ll be stuck in my house not wanting to talk to anybody and I don’t want others to be that way.

April’s goals for her work with Project Hero include getting stronger as a rider.  “I want to strengthen myself and would love to go to Denmark! My eventual goal is to do lots of conditioning and do all the other Challenges I have not accomplished, keep working with the San Antonio HUB, bringing more people and to keep volunteering - I love it.”

Valerie Gambino is a dedicated leader of our Jacksonville HUB, who is riding her fourth Challenge with us.  In addition to having a great experience with us at this year’s Texas Challenge, her story truly embodies the impact Project Hero has had on the lives of our riders.

Valerie lost her brother, New York City firefighter, in the 911 attacks and his body was never recovered – only his helmet was found.  She decided to lay his spirit to rest at Ground Zero and trained hard for several weeks to be a part of her first multiple day ride, the 911 Challenge.

But after the first day, she realized she had not done enough preparation and could not continue. Despite her tremendous disappointment, her Project Hero family convinced her to take a different perspective and feel good about what she had accomplished in getting ready for the ride and what she had done that day.

“It was devastating for me not to finish that day,” she said.  “But everyone supported me so when I finished the ride the next day, it was amazing to have gone from so low to so high!”

Valerie vowed to keep her promise to her brother’s memory until the next opportunity, which came when Project Hero rode the 2011 Minuteman Challenge.

“Because the ride started where we lived and ended at Ground Zero I wanted to finish that Challenge more than anything.  Sean McEndree kept me from breaking down emotionally and physically as we arrived at Ground Zero. The single remaining tree there is directly across from my brother’s name on the memorial and I realized I could lay his spirit to rest there.

“It was an incredible moment for me and my thanks are to Project Hero because Project Hero made that happen.”

Our journey continues tomorrow with a 75-mile trek to Waco featuring one of the greatest experiences any Project Hero Challenge can enjoy, our annual ride through Ft. Hood.