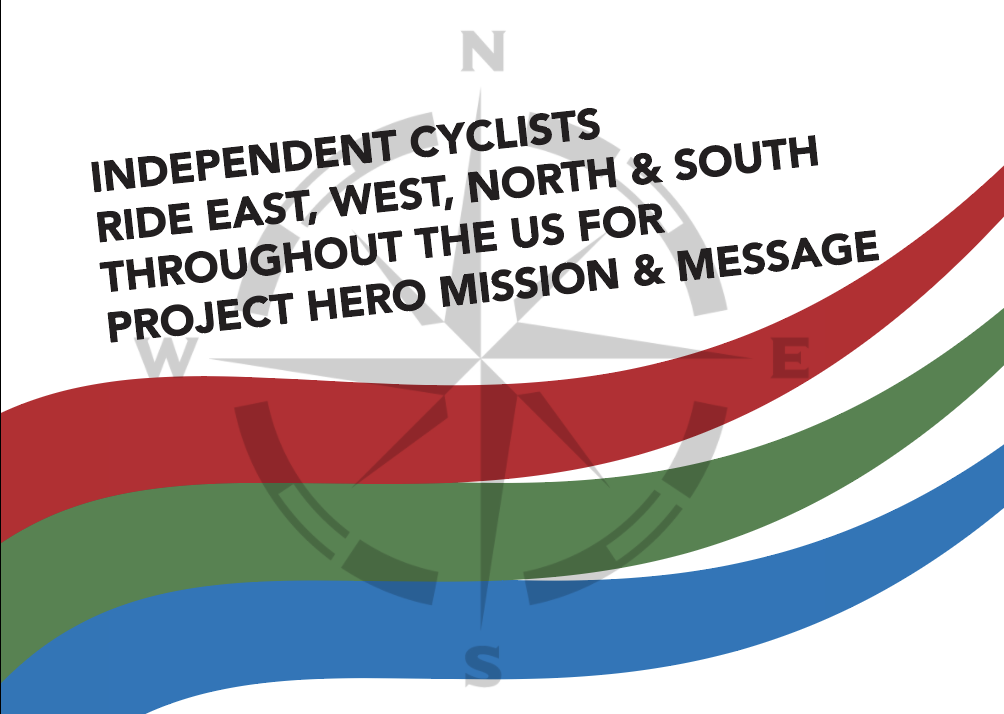 Every year, Project Hero has been blessed by support from riders who journey to the beat of a slightly different drummer than many others: those who ride thousands of miles solo and cross-country.

Many are veterans and first responders, many are not.  They all are truly great.

They prove it by riding tremendous distances through diverse terrain and adverse conditions that would put most of us off the bike and into the car — that is, if we had the discipline, commitment and strength to get on the bike that morning after weeks away from our families, friends and homes riding every day over thousands of miles in whatever weather the Fates decided to inflict.

In 2018, Project Hero is honored by the support of three riders who are making a difference in the lives of our Project Hero family and raising awareness of Project Hero throughout the nation, Jerry LaChance, Bob Sheldon and Steve Hughes.

Jerry LaChance, a 70-year-old volunteer firefighter from New Hampshire, created Jerry’s Ride 2018 in support of our Healing Heroes. Starting in Miami, Florida on April 9, Jerry rode along the eastern coast to the Canadian border, arriving in late May.  (In 2016, Jerry completed nearly the same ride in reverse, starting at the Canadian border and ending in Key West, and raised more than $25,000.)

An avid cyclist and a volunteer firefighter of more than 20 years for the Sandown Fire Rescue, Jerry is a Vietnam veteran who wanted to find a way to give back and support the brave service members he considers to be his heroes. During a Project Hero Honor Ride, he met a veteran who lost his leg during his service and was using an adaptive bike that he received from Project Hero, inspiring Jerry to do more to help the organization.

“I want to do more to help my wounded and disabled brothers and sisters recover,” he said at the start of the ride, not knowing what an amazing impact he would have throughout his journey.

This year, Jerry rode the entire route with the support of his hometown Sandown Firemen’s Association and made overnight stays at fire houses in communities along the way. Jerry departed Miami, Florida on April 9, 2018, and arrived in Pittsburgh, New Hampshire on May 19.

Jerry’s start was at once auspicious and nearly disastrous when his bike was damaged in shipping.  But word got out quickly and local firefighters and bike shop owners helped him get a new bike without missing a beat!

Jerry’s journey was highlighted by extensive media coverage, including NBC network news and stories in more than a dozen newspapers that generated more than 250,000 impressions worth more than $50,000.  In April, he was named “Granite Stater of the Month,” as an outstanding New Hampshire citizen who has gone above and beyond to help their neighbors and make their communities stronger by New Hampshire Senator Maggie Hassan.  The honor was also read into the Congressional Record by the Senator.

Jerry’s fund-raising totaled more than $16,000 and he rode approximately 2,800 miles.  Following his arrival in New Hampshire, the Sandown fireman’s Association hosted a reception where he was presented with an inscribed copy of the Congressional Record in which he was designated as Granite Stater of the Month and with a commendation from New Hampshire Governor Christopher T. Sununu.

Thank you, Jerry from all of us at Project Hero!

A 30-year Navy veteran from San Diego, ‘Pilot Bob’ Sheldon successfully completed his coast-to-coast solo bike ride on August 17 in Florence, Oregon, finishing his journey among family and friends who traveled from throughout the US to be a part of his momentous occasion.

“I plan to ride this trip in honor of all who have given so much to serve their country,” he said at the start.  Bob began his ride in May in Yorktown, Virginia, traversing Virginia, Kentucky, Illinois, Missouri, Kansas, Colorado, Wyoming, Montana and Idaho before arriving in Oregon.

“Three months is a long time to be away from home and family and all things familiar, but the sheer jubilation I felt crossing the finish line made it all worthwhile,” he said. “In the grand scheme of things, the difficulty of being away from home for so long is a small sacrifice to achieve a lifetime of memories and unparalleled sense of accomplishment.”

As part of the celebration, Bob expressed his gratitude to the people who supported his Project Hero fund-raiser.  “Seeing that support grow as my adventure progressed was especially motivating and rewarding,” he said.

Bob had no idea when he started out that he would encounter so many other cyclists and walkers.  “Each with their own unique and fascinating reason for being there,” he said.  “And that the camaraderie and friendships I made will stay with me forever.”

The high points of Bob’s journey were “time in the Rocky Mountains, riding along beautiful mountain streams lined by forest on both sides, listening to the chirping birds and running water,” he said.  “And meeting all of the patriotic wonderful people along the way.  I encountered incredible kindness in every state and the biggest surprise and most memorable part was the people I met along the way!”

And the low point? “Riding into 25mph headwinds in Kansas,” he replied. “Wondering why I was doing this?”

For Bob, moments of solitude were balanced by experiences of inspiration.  “I was incredibly inspired and humbled when I met a man who was riding a tricycle across the US after suffering a massive stroke and being told he would never walk again.  He was plugging away in defiance of his doctor’s diagnosis,” he said.

Bob had one other comment at the finish that certainly got his wife’s attention.

“It seemed like I was fighting the wind much more often than it was helping me so I think next time I’ll go east instead of coming west,” he said. “Okay, well, perhaps that wasn’t the right way to put it! I just meant if I were to do it again.”

With apologies to Mrs. Sheldon, we know what he meant: a few weeks of rest and he’ll be ready for another adventure and Project Hero will be proud to be with him all the way!

A 60-year-old disabled Air Force veteran, Steve Hughes will ride his bike from San Diego, California to Jacksonville, Florida beginning on September 19 and finishing November 20.  Steve is a retired Air Force Chief Master Sergeant, having served 28 years active duty.  He has always been an avid cyclist and has ridden all over the world, and as part of the Air Force cycling team that rides in the RAGBRAI.

“I am riding for anyone who is facing challenges, most of us do,” he said. “I am riding as a motivation that we all have the power to overcome our challenges!

Among those veteran charities is Project Hero, The Travis Mills Foundation and the Air Force Enlisted Village. “I have always been one to find ways to give back to society, and specifically my association with veterans. Project Hero, through building and donating adaptive bikes and producing cycling events throughout the nation to supporting community-based rehabilitation and recovery programs and important medical and clinical research, is raising awareness of the national PTSD mental health crisis and making a difference in the lives of thousands of veterans and first responders, as well as their families and communities.”

Before he retired from the Air Force, Steve injured his back and had to undergo a series of back surgeries but due to a mistake by the surgeon, he lost the use of his lower left leg and foot so has to wear a brace to walk. “Not being able to run anymore, it was even more important for me to be able to ride.  I can get on a bike without my brace and I feel normal again!” he said.

Since retiring, Steve has devoted his life to helping others and motivating others to never give up. He will be riding the Adventure Cycling Network Southern Route and will be supported by his wife with the goal of arriving on Veterans Day at the Bob Hope Village in Shalimar, Florida, and then finishing in St. Augustine, Florida.  He will also stop at military installations along the way.

“I thought that not only can I motivate people and inspire people because of my own “disability”, but also because of my age.  I want people to be able to look at me and think, ‘Wow, he is 60 and disabled and look, he is riding across America!’ ”

Steve doesn’t expect others to ride across country, but maybe “simply getting out of bed, taking an extra step, walking around the block, standing against their challenge! That is just one reason for riding, inspiring others and continuing to prove to myself that I can still keep pushing forward,” he said.

“The most effective way I can help is through my own actions, showing others that despite our physical limitations, we can still do things, we can still achieve, and we can still be productive and active in our lives,” he said. In 2005 he rode his bicycle from Maine to Florida for charity.  “When I completed that ride, I vowed to do it again, but this time from coast to coast.”

You can contribute to Steve’s ride at www.projecthero.org and follow his progress at