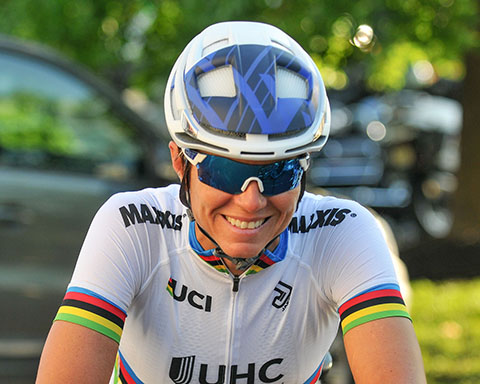 Shawn Morelli is a rider whose story, personal character and dedication to cycling epitomizes the powerful force Project Hero can be in the lives of Veterans with injury and PTSD. Shawn was in the Army and deployed as an engineer officer in Afghanistan in 2007 when she was injured.  Cycling became a vital part of her recovery and Project Hero has been a significant part of her return to resiliency.  Shawn’s first experience with Ride 2 Recovery was in 2010 and since that time she has achieved greatness, including breaking the women’s C4 pursuit world record at the 2016 UCI Para-Cycling Track World Championships and earning two gold medals on the track at the Paralympic Games Rio 2016. HEROES magazine caught up with Shawn Morelli following her outstanding victories at the 2017 Paralympics to discuss her experiences at the games and her plans for the near future.
DESCRIBE THE EXPERIENCE OF PREPARING FOR THE GAMES
My experience was challenging. I trained all season for the time trial. Two days before the trial, I crashed, broke the rear derailleur hanger and shattered my rear derailleur. So I had to hope and pray the mechanics could fix it before race day, which they did and I had a great race!

WHAT CHALLENGES DID YOU FACE?
I faced some challenges, trusted my coaches and the mechanics and had a great race. I also had a great road race.
WHAT WERE YOUR PLANS FOR THE RACES?
I had plans for both races: I trained and studied the map: elevation, weather conditions, wind direction.
For the time trial the plan was simple. I had three 7.75 km laps and each lap had decent, climbs and a technical portion. I had a set power to hit for each section and a set average speed we thought I would need to win so I rode to those.
I had a gradual ramp up to full power, hammered the hills and the head wind as hard as I could and let the tailwind push me then rode the technical portion conservative and relaxed. The last lap and a half, depending on how the race unfolded, was to go as hard as I could.
I followed the plan for the road race and it worked out too. That plan was also simple: I needed to lose the other Cat 4s to win. I would not win in a sprint against them, so I had to put the ride to them early. The plan was to stay on the wheels of the Cat 5s for as long as possible and hopefully longer than any other Cat 4s and that’s what I did.

WHAT WAS YOUR BASIC APPROACH TO DEFENDING YOUR TITLES?
Simple strategy: I knew I had to do it to win so no matter what I was going to do it.

HOW DOES WINNING TWO GOLD MEDALS FEEL?
It was and is a great feeling knowing that I was able to defend and reclaim my world championship titles.

WHAT ARE YOUR PLANS FOR THE FUTURE?
I plan to attend the CA Challenge but after that, from until the end of March, my focus is on the track so I can defend my titles there.