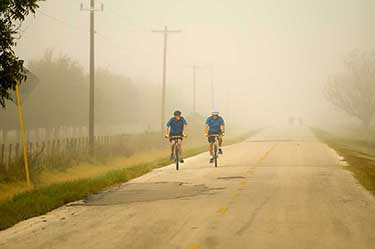 The lifting of the early-morning fog that blanketed the roads before the Optum Honor Ride Series Houston November 4 was a fitting metaphor for the start of a new day for Project Hero Houston and the people of the Magnolia City.
Beset by Hurricane Harvey, Houston is beginning its recovery, and the popularity of the Optum Honor Ride Houston made that clear as more than 250 riders took to the roads raising more than $20,000 to honor America’s Finest and support Project Hero HUB Houston.
“Hurricane Harvey and other events have not stopped us from having a great event today,” said Neil Campbell, one of the organizers of Honor Ride Houston.  “Our volunteers and riders from throughout the region here today are the reasons this ride and Houston’s recovery is successful.”
The Houston Honor Ride brought together cyclists and local supporters from several states and an international contingent, including Edward Goodall and his son James, who live in the Houston area after moving from Nottingham, England.
“I did some local rides and some training so I’m ready and we’ll do the 42 today,” said James before the ride.  “It’s a great day for a ride!”
On November 3, Project Hero Houston also honored a group of local Veterans for their service to the community during Hurricane Harvey. The Veterans rescued citizens using Military Museum vehicles and helped provide tens of thousands of meals to local residents. The presentation included bicycles to be used at Project Hero Houston HUB by each honoree.
Chad Mitchell from San Marcos served in the Army from2003 - 2009 and was introduced to Project Hero at Fort Hood.  His challenge at the Houston Honor Ride was transitioning from a fixed gear to standard geared road bike.  “There’s some hills in San Marcos and I want to keep up with the club there when I ride,” he said.  He rode the Honor Ride’s 20 miles without a problem.  “It was a really nice 20 miles and everyone here makes it fun,” he said after finishing the ride.