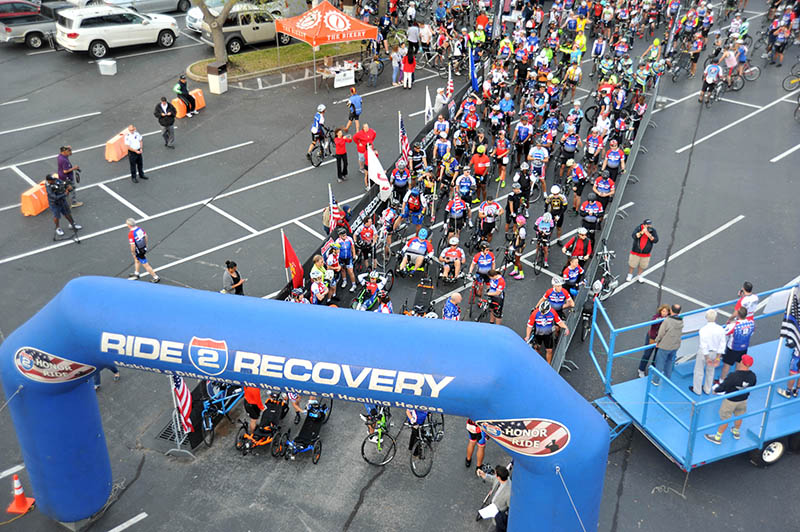 Tampa, Fl., saw nearly 500 cyclists come out to ride in honor of Veterans and First Responders during the 2017 UnitedHealthcare Honor Ride Florida.

Starting and finishing under a beautiful Florida sky at Tropicana Field in downtown St. Petersburg, nearly 500 cyclists rode in honor of Veterans and First Responders February 18 at the 2017 UnitedHealthcare Florida Honor Ride.

“It was heartwarming to see how strongly our community supported this event. With riders, volunteers, family and friends, we had well over 1,000 people participate, said Mitch Lee, event director and leader of Project Hero HUB community center in Pinellas County. “I want to thank all of our sponsors, Raytheon, Duke Energy, USAA, Ditek, D-Mar and of course, UnitedHealthcare. Without them we would not have been able to reach our goal of raising $90,000.”

Cyclists from throughout the community – and many from outside of Florida, rode alongside America’s healing heroes in self-paced routes ranging from 20 to 60 miles, as well as a special 7-mile family route, in the event which was also supported by local sponsors Raytheon, Duke Energy and Ditek.

“UnitedHealthcare is honored to support this event for the men and women who serve our communities and our country,” said David Lewis, CEO of UnitedHealthcare Central and North Florida. “Project Hero provides exercise and rehabilitation services that are critically important to helping injured Veterans and First Responders return to the health and well-being they richly deserve.”

The ride was kicked off with remarks from U.S. Representative Charlie Crist, Mayor Rick Kriseman of St. Petersburg and Mayor George Cretekos of Clearwater; and the ceremony was highlighted by the singing of the national anthem by Lee.

“The Honor Rides give cyclists of all levels the opportunity to ride and support America’s Veterans and First Responders in a meaningful way, and demonstrates the growing interest in this important cause,” said John Wordin.  “We’ve seen participants establish life long relationships while achieving personal goals – a true demonstration of community support.”